My last visit to this part of Tochigi was in December 2018. I was concerned about snow on the hiking trails in mid-December, so I chose a low mountain close to Kanuma station. The whole area has many mountains with lots of hiking trails, and so far I’ve only scratched the surface. 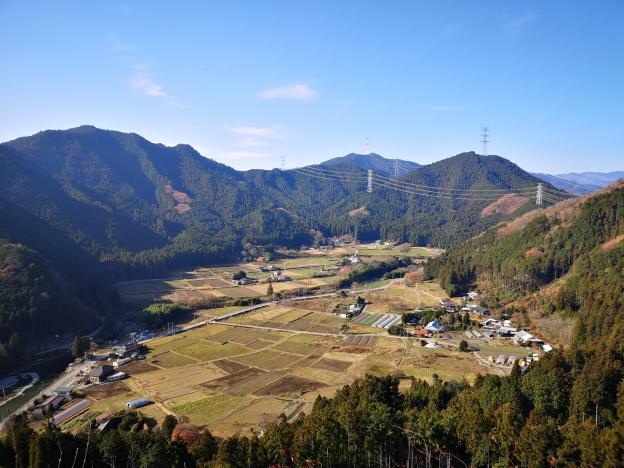 A hidden valley encircled by mountains

A short bus ride (the same one for Furumine Shrine) took me to the entrance of Choanji Temple 長安寺 a little before 9am. The start of the trail, to the right of the temple, had been washed away by typhoon Hagibis. Fortunately, wands with pink ribbons had been placed through the wreckage of fallen trees, allowing me to make my way to an undamaged forest road above, leading to a good view of the valley below.

It’s a scramble but the path is still climbable

I then left the forest road for a nice hiking trail taking me to the top of the ridge with even better views of the entire area. Westwards, I could see Kobugahara and Mt Yokone, which I had climbed last year. There was a power line that cut across the entire landscape; the pylons were placed at the top of each ridge, and the electrical wires spanned the valley in a spectacular manner.

Bringing electricity to all villages in the mountains

After taking in the views, I continued along the ridge and soon entered a cedar forest with few views. This part was fairly easy, with some slight ups and downs. Suddenly the path started to climb steeply; rocky sections appeared, with rope on the side to help pull yourself up. The air also got colder – I could feel that the top was close. I reached the summit of Mt Hagaba 羽賀場山 completely in the trees just before 12h30. I found a small opening facing Southeast, and sat down to have lunch, with a view of the hills of Southern Tochigi stretching away into the distance. 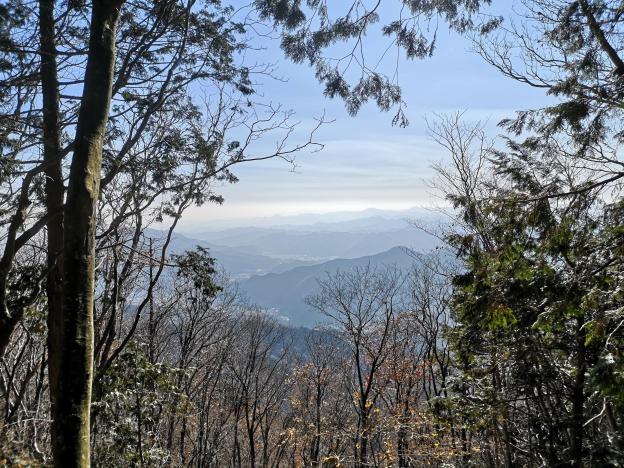 Looking back towards Kanuma

Since I had barely completed half of the hike, I couldn’t spend too much time at the top. After setting off again, the path started to descend quite steeply – too much in fact. I realised that I may have lost the trail. I retraced my steps. Suddenly I heard some voices to my right. The ridge on that side didn’t descend quite so much, so I found what seemed like a path and crossed over. Once I was off the steep slope, I was more confident I was on the right path. I then encountered a group of three hikers – the only people I saw on the entire hike, and the sources of the voices I had heard earlier.

As the hike progressed, the ridge got narrower

From this point, the path went up and down more steeply. There were more and more rocky sections – it was starting to turn into an exciting hike. At one high point I had a glimpse of the Nikko mountain range through the trees. After one final steep climb, I reached the top of Mt Otenki お天気 (777m) at 2pm. It was an unusual summit in that there were at least five different summit markers! A few meters beyond the summit, there was a magnificent view of Mt Nikko-Shirane, Mt Nantai and Mt Nyoho. To the left and right were countless other mountains and ridges, mostly snow-free.

I would have spent an hour gazing at the view, but according to my guidebook, another 90 minutes were needed for the descent, and my return bus was at 4pm. I reluctantly started going down at 2h30. The path was very steep. It split into two and I took the left path following the ridge (both paths take the same time). I reached the bottom of the valley as the sun was starting to get low, creating some nice effects in the forest.

I arrived back the road and the bus stop after only one hour, one of the rare times I’ve ended a hike way ahead of schedule. Unfortunately there wasn’t much to do in the neighborhood, but I was able to use the time to get ready for the two hour trip back to Tokyo.

NEXT UP: Mt Omaru in Kamakura, Kanagawa