This was my first day hike of 2015, and since it was during the Japanese New Year or “shogatsu“, I wanted to have some good views of Mt Fuji, do a station to station hike (buses run on special schedules during that time), and, if it wasn’t too much to ask, end the hike at a nice onsen. I want all hikes to be good hikes, but the first one of the year should be special.

The city of Kawaguchiko at the base of Mt Fuji

I took a train to Mitsutoge station: I hadn’t been there since I first climbed Mt Mitsutoge several years before, and I had completely forgotten that there was a fantastic view of Mt Fuji from just outside the station. This time, however, I was climbing a mountain on the other side of the railway line. The trail started next to Yaku Shrine, 15 minutes from the station. However, I accidentally went down another trail that was level instead of going up. Once I realised my mistake, I cut through the forest up the side of the mountain to reconnect with the correct trail. 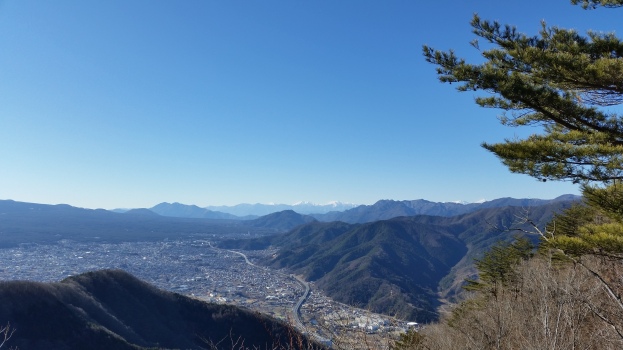 The Kawaguchi toll road snaking down the valley

I soon started getting some good views up and down the valley connecting Kawaguchiko and Otsuki cities. It was a fairly relaxing climb, the only steep bit came at the end, going up the small pyramidal summit. I reached the top of Mt Kurami  (Kuramiyama 倉見山) after about 90 minutes, around noon. There was an excellent view of Mt Fuji, resplendissant in its winter coat. I could also see Mt Mitsutoge, the cliffs below the summit area making it look like an impregnable fortress. Looking North, I could spot the peaks of the Oku-Chichibu mountains. Looking South, I could gaze on the vast urban sprawl of Kawaguchiko City. On this clear sunny day, the snowy peaks of the Minami Alps were clearly visible.

Easy hiking on the way down

The descent, through a beautiful pine forest, took another ninety minutes. The trail was very easy to walk, and offered many good views along the way. It often felt like I was flying above the small houses in the valley below. The sun was now slightly behind Mt Fuji, so the side facing me was in the shadows, less good for taking photos. I reached the bottom of the valley just past 3pm. I then walked another 30 minutes to Yoshinoike Onsen 葭之池温泉 for a quick hot spring bath, before taking the train from the nearby station back to Tokyo.