This was another hike following the Kanto Fureai no Michi. This time I combined two short segments, so that I could start and end at a train station. The trail went through the countryside and low hills of Eastern Tochigi, near the border with Ibaraki, and about 20 kilometers North of Kasama city. I was hoping that I would be able to walk on forest paths, and that I would be able to enjoy a hike that didn’t take me up a mountain. 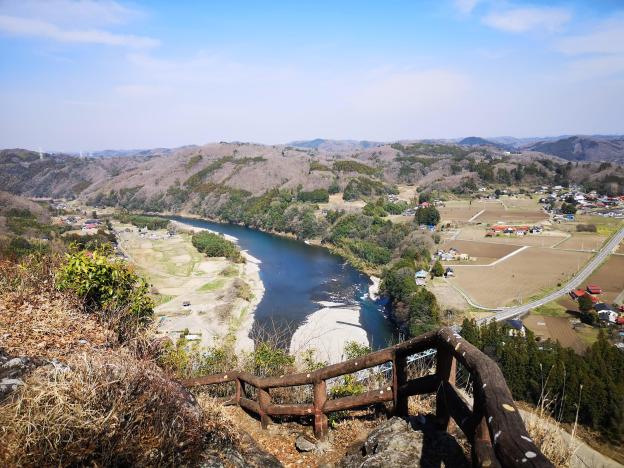 A secret spot in Tochigi Prefecture

Although I had planned to hike from train station to station, in the end I took a bus from Utsunomiya (Google Maps insisted it was quicker). I arrived at Motegi station, the last stop on the Moka railway, at 10am. I had never been to this corner of the Kanto area before; even though it was just 100km from the center of Tokyo, it felt like I had traveled to the other side of Japan. It was a beautiful blue sky day, and the temperature was on the warm side. I got ready and started walking around 10h30. I followed the distinctive Fureai no Michi signs to a river, which in turn led me to Shiroyama Park, located on top of a low hill.

There was a small watchtower on one side, probably a reconstruction. From the top, I had a good view of Motegi town to the South, cut in two by the Sasaka river. In the distance I could make out the ridgeline of Mt Takamine. On the other side of the park were the foundations of Shiroyama Castle, as well as some weeping cherry blossom trees or “shidarezakura” in full bloom. The trail continued down the other side of the hill and onto a small road. At 11h30, I arrived at Arakashi Shrine. The path from the entrance “torii” and the shrine itself was lined with some impressive giant cedars. 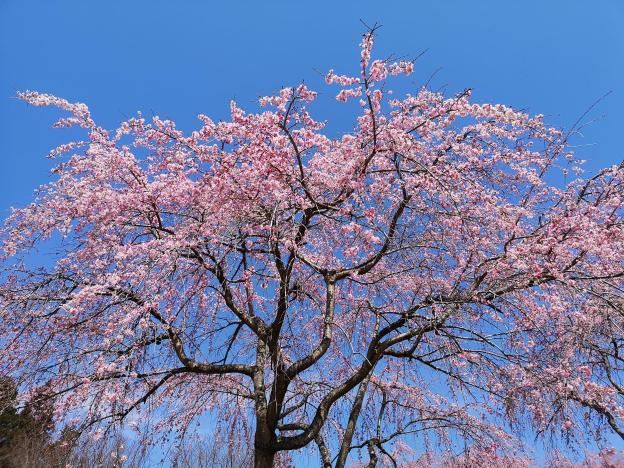 The next hour was mostly along small back roads. Walking on a road with little traffic is fine. However the longer you do this, the more you feel tired in your legs. There were some wide views, but like with forest roads, fewer surprises. The road took me all the way to the top of Mt Kamakura 鎌倉山, and despite its low elevation, there were good views on both sides of narrow forested valleys. There was a small shelter, so I sat down for lunch.

View North from the the top of Mt Kamakura

Afterwards, I followed a small trail for a few minutes along the top ridge, past a tiny shrine, and arrived at a dramatic viewpoint. It showed a wide bend of the Naka river, famous for being the clearest river in the Kanto area. While I was taking pictures, I noticed a couple of birds of prey, flying in circles and using the air currents to gain altitude once they had drifted too low (see video at the end).

I couldn’t stay too long since today’s hike was about 25 kilometers. Also, there was a soba restaurant, on the other side of the river, that I wanted to drop by, even though I had just had lunch. I quickly followed a small path down the side of the small mountain. While crossing the bridge, I noticed a group of people kayaking down the river, something I might like to try one day. 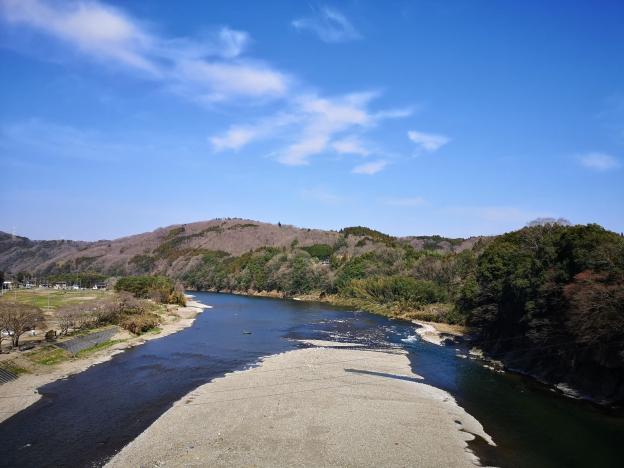 Naka River as seen from the bridge

After a delicious meal of cold soba and tempura or “tenmorisoba” at Sobanosato Magino, I continued on my way at about 2h30. The next two hours were again mostly along small roads. They were interrupted by two short sections of lovely forest walking. Occasionally I had some good views of the surrounding hills. There were a couple of observation towers, but the views must have been better decades ago, when the trees weren’t so high.

One of the nicer sections of the hike

It was getting late, so I decided to skip the last part of the hike to Kaiishi Shrine, and head directly to the train station. I recrossed the Naka river, and followed the road till I reached the Ryumon falls 龍門の滝 just after sunset. After admiring the falls, I made my way to the nearby and appropriately named Taki station (meaning waterfall station) to wait for the local train for Utsunomiya, where I would hop on the shinkansen for Tokyo. In the end there was a little too much road walking for my taste, but I was happy that I was able to summit at least one mountain!

Sunset on the Naka River

Birds in flight above Tochigi Prefecture