I had climbed these two peaks before, but separately and via different routes. The trail along the connecting ridge was one of the few remaining ones for me to hike in the Doshi Sankai, the mountainous area between the Tanzawa and the Oku-Chichibu mountains. Although I was guaranteed good views from each summit, I was curious whether I would get more views along the way. According to my map, the total hiking time was nearly 7 hours, so I also wondered whether I would be able to do the full hike. Finally, since it wasn’t a popular trail, I was hoping it wouldn’t be too difficult to follow. 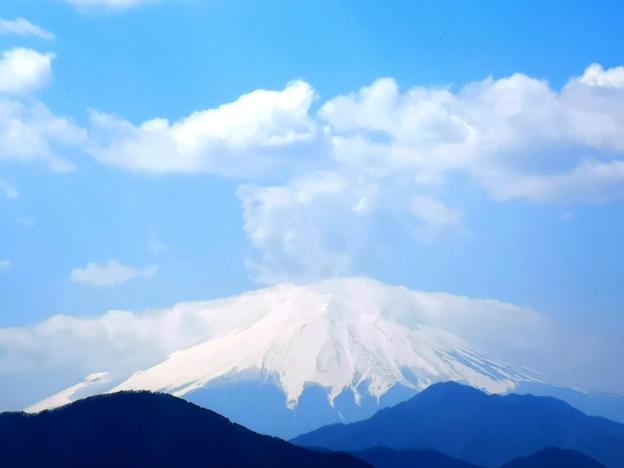 I took the local Chuo line to Uenohara, where I caught a nearly empty bus for Mushono 無生野. The fifty minute ride took me along some exciting, narrow roads through beautiful countryside, dotted here and there with cherry blossom trees in full bloom; it was like a magical hidden valley. After getting off at the last stop, I walked ten minutes on the road to get to the start of the hike, marked by a sign on the right. Past a fence for keeping wild animals out, the trail entered a thick forest of cypress trees. Here the path was hard to follow here, at one point entering a streambed for a few meters, but became easier once it started to climb. It was still winter in the mountains, and the path was sunny under the leafless trees.

Climbing out of the valley towards the pass

At 10h30, I reached a pass, joining up with the path for Mt Kura. I didn’t have time to do the round trip to the top, but I had been there twice before. I turned left and a few minutes later I reached the top of Mt Tenjin (876m) 天神山. There was a great viewpoint of Mt Momokura and Mt Ogi on the other side of the valley to the North. After a few quick pictures, I continued on my way. The trail went up and down, and I soon reached the top of Mt Takahata 高畑山, meaning high field. On my last visit in June 2018, Mt Fuji was completely hidden. This time around I could see Japan’s most famous volcano, all but the very top free of clouds. 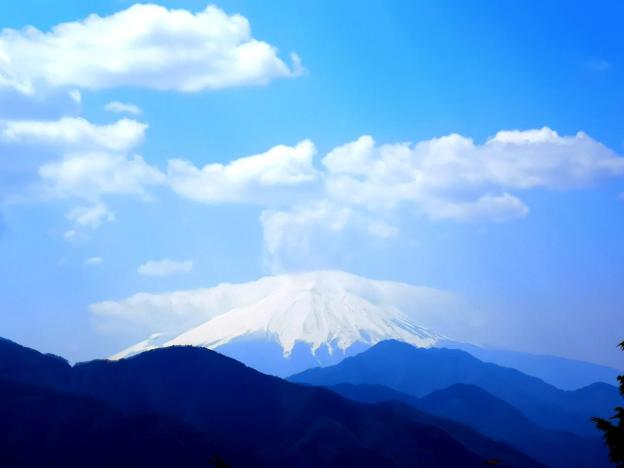 Mt Fuji wearing one of its “cloud caps”

It was still early for lunch, so I moved on without a break. I passed by the minor summit of Mt Okuwa (980m) 大桑, with 3 different summit markers but no view, before descending to a road. While continuing down it, I came across a green snake. It was sunning itself in the middle of the road, but once it realised I was there, it slithered away into the bushes (see video at the end of the post). The road soon joined up with the road for Saruhashi, and went uphill for a bit before reaching a pass. Here the hiking trail reappeared on the left, heading slowly up the mountain.

This snake is most likely an Aodaisho or rat snake

At 12h30, I arrived at the top of Mt Takasazu (860m) 高指山. Despite the lack of view, I found a sunny log to sit on, so I decided it was a good place to have lunch. Afterwards, the trail went down for a bit, before climbing again, following a fence on the right side. The surrounding trees changed from deciduous to coniferous, giving the trail an alpine feel. I had glimpses through the trees of the valley leading to Tsurishi city to the South; at the bottom lies the Maglev line that is still in construction.

More and more pine trees along the path

The Misaka mountains with Mt Takagawa on the far right

After an hour and a half, I reached a viewpoint of Mt Fuji, called Fujimidaira 富士見平, but the volcano was becoming hard to appreciate in the afternoon haze. A few minutes later, I was standing on the flat top of Mt Kuki 九鬼山, meaning nine devil mountain. On one side, through the trees, was another view of Mt Fuji, the top part now firmly in the clouds. On the West side, there was a wide view of the Misaka mountains, including Mt Mitsutoge on the left side.

Mt Fuji making its final appearance of the day

I was only one hour away from the train station, and largely ahead of schedule, but as the summit was in the shade, I left soon after finishing my lunch. There were several routes down, and I decided to take the Ike-no-yama one. The first part was quite steep, but after a few minutes, I spotted a sign for Tengu-iwa 天狗岩 on the left. It promised a great view only minutes away. Since I had loads of time, I decided to check it out. It turned out to be a couple of boulders in a small opening on the side of the mountain. Standing on top of them, I had the best view of the day, looking down the valley leading to Kawaguchiko City. On the right was Mt Mitsutoge, and on the left was the ridgeline between Mt Imakura and Mt Nijuroka hiked in 2016. In the back, I could just about make out the shape of Mt Fuji. 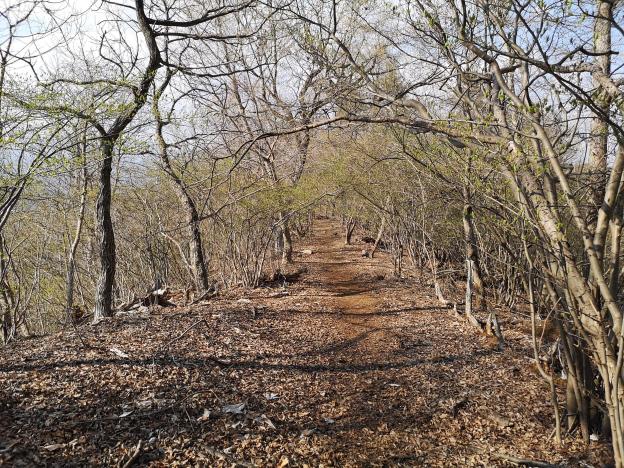 Walking down the Ike-no-yama route

Lots of views on the way down

I returned to the trail and continued down the mountain. This was by far the most pleasant section of today’s hike. On top of the occasional views to the left, I also spotted some yamazakura or mountain sakura in bloom. I reached a sign for Mt Ikenoyama 638m 池の山, meaning pond mountain, even though there was no apparent summit. The road at the end of the hiking trail was lined with sakura in full bloom, making a nice end to what was a satisfying ramble through the mountains. The walk back along the road to the charming Tanokura station took ten minutes, and I arrived there just after 4pm. After arriving at Otsuki two stops further, I caught the limited express back to Tokyo.

Sakura lining the road at the of the hike

Although there were few views between the two peaks, I was relieved that the path was easy to follow with frequent signposts. One curious aspect of the hike was that there was often two or even three types of signposts at various points, all equally worn out. Overall I was glad that I was able to complete the hike nearly one hour under the map time, and being able to get to Tokyo before sunset.

Caution: Snake on the road!