I had been to Mt Sengen in May 2016 as a half day hike, and to Ranzan in December 2016 as a short bike ride. Since then, the hiking trail has been lengthened to connect both areas so it seemed like a good idea to return to there. I believe that Ogawamachi town makes an excellent base for hiking due to its close location to Tokyo (70 minutes by direct train from Ikebukuro) and proximity to the Higashi-Chichibu mountain area.

The hike starts from behind the Mt Sengen Miharashi no Oka Koen (view hill park) that is best reached by a short taxi ride (about 1200 yen) from the station. Otherwise it’s nearly a one hour hike. Before leaving, make sure to try a tofu donut from the small store opposite the station. The park has an observation tower with great views, and a roller slide.

The path to Mt Sengen 浅間山 follows the top ridge through beautiful forest with occasional views of Tsuki River on the left. The summit marker is reached soon after passing a jump off spot for paragliders. It’s a mostly flat place in the forest with an opening to the West. Afterwards the hike continues southwards with a number of small ups and downs. Along the way are the ruins of Aoyama castle – there isn’t much to see but you can imagine that a fine castle must have existed in such a good location.

Beautiful forest on the approach of Mt Sengen

The well-marked path first continues South, then bends to the East, passing several minor peaks along the way, eventually reaching Okura castle ruins. As before there isn’t much left to see, but there is a good lunch spot with log seats and an Eastward view, on top of the slight rise on the right side. Beyond that, the path gradually descends before reaching a road, where one needs to go left for the bridge over Tsuki river and the entrance path to the path for the Ranzan river valley.

After crossing the bridge, there is a small trail that leads right down to the river on the right side. It’s worth heading over there since the views up and down the river are very pretty. However it’s a dead end so – the path to Ranzan is above, behind the parking area. It’s an easy-to-walk straight path that leads to the base of Mt Ohira, a short climb with a nice view. However it’s worth continuing straight along the path till reaching the river side – this is the highlight of the Ranzan river valley 嵐山渓谷. It’s a nice place to take a break. 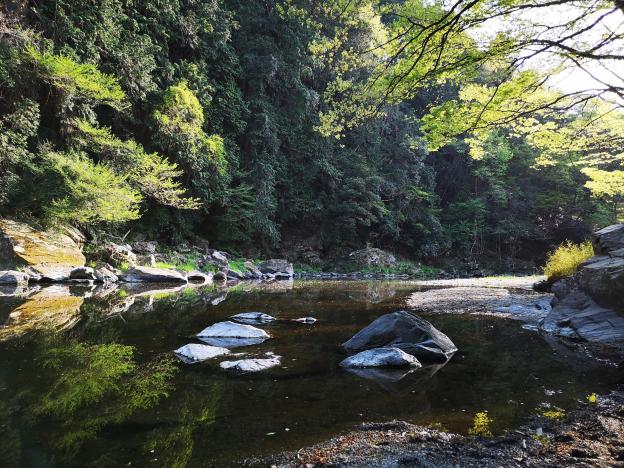 A peaceful place to take a break

To finish the hike, take the path heading eastwards following the river downstream. Eventually it leads to a road – Musashi-Ranzan train station on the Tobu line is less than 30 minutes away. It’s also possible to catch a bus back (use Google maps).

See what it is like going down a roller slide with a view!