This hike was also different from usual, since it was more walking and sightseeing than pure hiking, albeit with a couple of summits and some views. I had hiked nearly all the mountains near the Mito and Joban lines, except for the ones near Kasama station. The hike described in my “Mountains of Ibaraki” was only 3 hours long . However, it followed the Kanto Fureai no Michi, and I was confident that there would be some interesting sights along the way enabling me to stretch the hike to a full day.

Nearing the top of the castle

After a later than usual departure, I transferred to the Mito line in Oyama, and reached Kasama station a little before 11am. There was a tiny tourist information office outside, where I picked up some good maps of the area. It took half an hour through town to reach the Kasama Inari Shrine, the main attraction of the area. I spent some time exploring the shrine and the main shopping street in front of it, and I only started up the hiking trail, ten minutes East of the shrine, around 1pm. 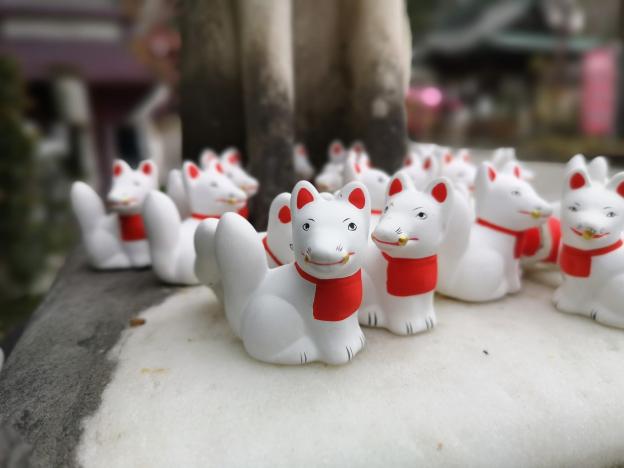 Kasama Inari Shrine is dedicated to the fox god

The first part was a short climb up a rounded hill called Fujiyama (143m) 富士山, quite a common mountain name in Japan. It was an azalea park, but none were in flower at this time of the year. Although there was no summit marker, there was an observatory platform with a 360 degree panorama of the entire area. Looking South, I could see Mt Wagakuni, climbed in 2017, and West, Mt Takamine and Mt Bucho, climbed in 2018. The skies were overcast, but I am sure the view must be spectacular on a cloudless day. 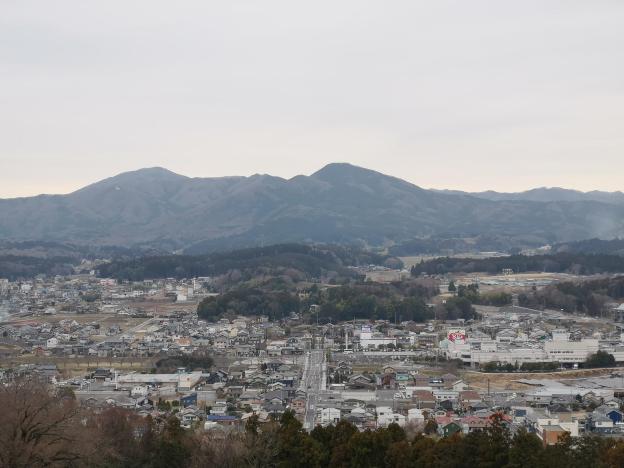 I followed the road down the other side, crossed a larger road, and continued up a small road into a cedar forest. On the side of the road, there was a large boulder known as “Daikokuseki” (大黒石 or big black rock), which had been rolled down from above on castle attackers. A little further on the right, was the start of the road up to the ruins of Kasama castle. Halfway up, I took a shortcut via a flight of moss-covered stairs, to reach a flat grassy space. It was hard to figure out the way when looking at the map, but it was easier while walking it because there were frequent signposts of the Fureai no Michi.

Leafy and mossy steps leading to the ruins of Kasama castle

As with many old Japanese castles, there wasn’t much left to see, just traces of the foundations overgrown by grass. At the back, there was another staircase leading to the shrine at the very top of Mt Sashiro 佐白山, which I reached just after 2pm. It was completely in the trees, except for a small gap to the West. Behind the shrine, was an alternate path going down. It was steep and rocky, but there were some chains for steadying oneself. It led to a place with some big boulders, called ishikura (石倉 or rock cellar). I climbed on top of one of them to see the view to the East. A mostly level path through the forest brought me back to the castle ruins.

Stone steps leading to the top of Mt Sashiro

On the other side, there was a hiking path leading down the mountain through the forest. I arrived at Sashirosanroku park after 3pm. At this point I felt quite satisfied with today’s hiking, and since I was close to the city, I decided to have a late soba lunch. I chose Sobakiri Ichibee そば切り一兵衛, fifteen minutes away on foot. It seemed quite a famous place, judging from the autographs of celebrities covering the walls. After a satisfying meal of soba and tempura, I made my way back to Kasama station, twenty minutes away. There I got the local train for Tomobe, where I switched to the limited express for Ueno.

NEXT UP: Mt Hinata & Mt Mijo in Tanzawa (Kanagawa)

I had been to Mt Sengen in May 2016 as a half day hike, and to Ranzan in December 2016 as a short bike ride. Since then, the hiking trail has been lengthened to connect both areas so it seemed like a good idea to return to there. I believe that Ogawamachi town makes an excellent base for hiking due to its close location to Tokyo (70 minutes by direct train from Ikebukuro) and proximity to the Higashi-Chichibu mountain area.

The hike starts from behind the Mt Sengen Miharashi no Oka Koen (view hill park) that is best reached by a short taxi ride (about 1200 yen) from the station. Otherwise it’s nearly a one hour hike. Before leaving, make sure to try a tofu donut from the small store opposite the station. The park has an observation tower with great views, and a roller slide.

The path to Mt Sengen 浅間山 follows the top ridge through beautiful forest with occasional views of Tsuki River on the left. The summit marker is reached soon after passing a jump off spot for paragliders. It’s a mostly flat place in the forest with an opening to the West. Afterwards the hike continues southwards with a number of small ups and downs. Along the way are the ruins of Aoyama castle – there isn’t much to see but you can imagine that a fine castle must have existed in such a good location. 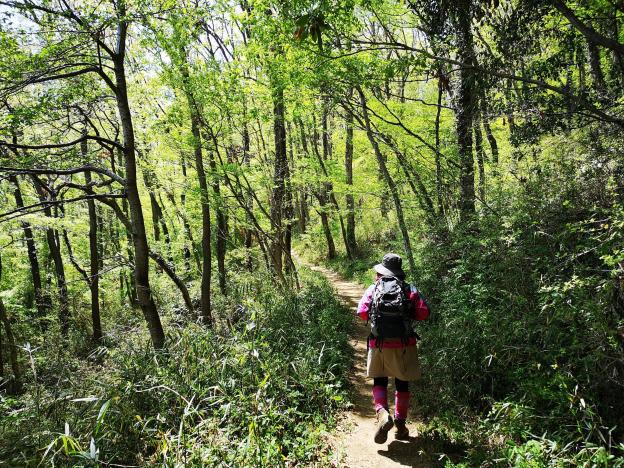 Beautiful forest on the approach of Mt Sengen

The well-marked path first continues South, then bends to the East, passing several minor peaks along the way, eventually reaching Okura castle ruins. As before there isn’t much left to see, but there is a good lunch spot with log seats and an Eastward view, on top of the slight rise on the right side. Beyond that, the path gradually descends before reaching a road, where one needs to go left for the bridge over Tsuki river and the entrance path to the path for the Ranzan river valley.

After crossing the bridge, there is a small trail that leads right down to the river on the right side. It’s worth heading over there since the views up and down the river are very pretty. However it’s a dead end so – the path to Ranzan is above, behind the parking area. It’s an easy-to-walk straight path that leads to the base of Mt Ohira, a short climb with a nice view. However it’s worth continuing straight along the path till reaching the river side – this is the highlight of the Ranzan river valley 嵐山渓谷. It’s a nice place to take a break.

A peaceful place to take a break

To finish the hike, take the path heading eastwards following the river downstream. Eventually it leads to a road – Musashi-Ranzan train station on the Tobu line is less than 30 minutes away. It’s also possible to catch a bus back (use Google maps).

See what it is like going down a roller slide with a view!