These mountains are located in the Western half of the Tanzawa mountains, and harder to access than those in the Eastern half like Mt Tanzawa and Mt Oyama. I  rode the bus from Shin-Matsuda station for over an hour, past Tanzawa lake, all the way to the last stop, the Nishi-Tanzawa Visitor Center 西丹沢ビジターセンター, a great starting or ending point for hikes in the area. It was the second week of November, which was rather late in the season; the autumn colours had already crept down the mountain sides into the valley. I was told by the staff at the visitor center to start heading down by 1pm at the latest, to avoid getting caught in the dark.

Hiking in the Tanzawa Mountains

Ask for a hiking plan for Mt Omuro

In the back hidden in the clouds is Mt Fuji

I set off at 10am under blue skies. The first part of the hike was along a small road that followed the river valley past a couple of camping sites. At the first junction, I headed right – I would be descending via the left junction. Here I finally entered the hiking trail proper, also part of the Tokai Nature Trail 東海自然歩道. I followed a narrow valley alongside a rocky river. Looking up, I could admire autumn colours in all directions. After an hour of climbing, I reached a pass, an Emergency hut, and the first views. However by now, grey clouds had rolled in hiding the ridgelines.

The brilliant red of the “momiji” tree

Climbing up through a “koyo” tunnel

I still needed another hour an hour of tough climbing to reach the summit of Mt Omuro (大室山 oomuroyama), a 100-famous mountain of Yamanashi and the 3rd highest peak of the Tanzawa mountains. Here, the trees were already bare of leaves, a strong hint that winter was just around the corner. I was now mostly above the clouds that had gathered on the Southern side, with just a few milky strands of mist left. I had great views North of Doshi Valley and the Doshi Sankai mountains. Since it was nearly 1pm, I had a quick lunch, and made my way Westwards along the ridgeline to the next peak Mt Kanyudo (加入道山 kanyuudouyama).

Mist and leafless trees near the summit

There was another emergency hut here, but fortunately I still had enough time to descend safely.  Soon, I was walking on a wooden path alongside a beautiful mountain stream with a carpet of colourful fallen leaves on both sides. Suddenly the path and the stream parted ways. A few minutes later, I caught a glimpse of an impressive waterfall to my right. By now the clouds had disappeared and the blue skies were back. The sun had already disappeared behind the mountain ridge behind me. I emerged into a river valley with rocky banks, which I crossed several times on small wooden bridges, and finally got back to the visitor center by 4pm. 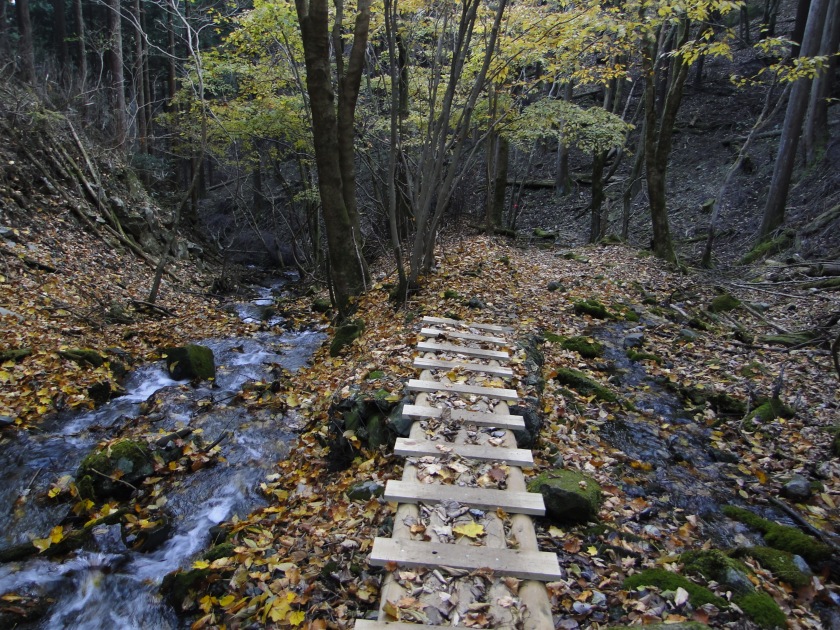 Easy walking on the way down

Ask for a hiking plan for Mt Omuro