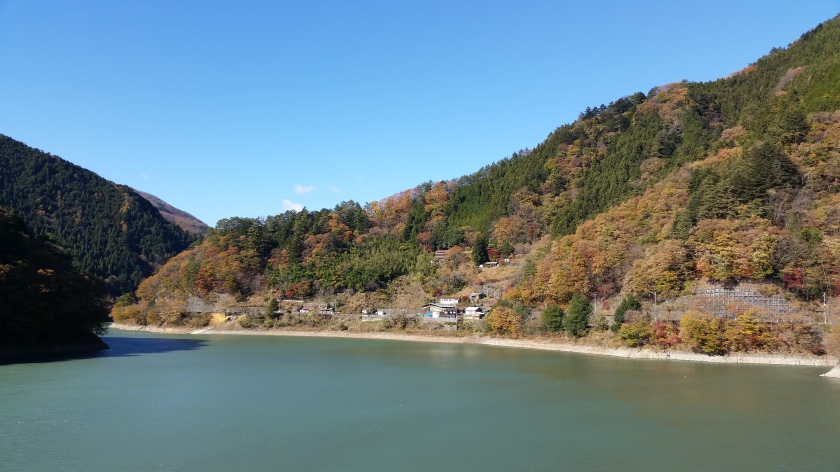 Yesterday I went for a hike in the Okutama area, starting from the Western edge of Okutama lake at  Miyama Bridge 深山橋, going up Mt Shishigura 鹿倉山 1288m (not Shikakura as the Kanji suggests), and ending up at the Nomekoiyu のめこい湯 hot spring.

However it isn’t about the hike itself that I wish to write but rather about getting to and back from the area in the general. The trouble with Okutama is that it mostly sits within the Tokyo prefecture, one of the most populated areas in the world, and thus the trains and buses are packed, especially during the autumn foliage season.

Fortunately when I went out there on a whim yesterday (bad weather threatened my preferred options), I was able to sit all the way there and back. Seeing that the total travel time was nearly 5 hours, I feel that this considerably enhanced my experience, and it only required a little planning and some luck.

First, I turned up at Shinjuku station 20 minutes before the scheduled departure time of the direct train to Okutama and positioned myself first in line at the appropriate spot on the platform (indicated by an overhead sign). The train pulls in ten minutes early since it starts from Shinjuku so the rest of the waiting time is spent sitting comfortably.

After arriving in Okutama, I got off as quickly as possible and lined up for the bus. Despite the crowds it only took me a few minutes since I had previously charged my Pasmo with a generous amount of money and skipped the bathroom. Once out of the station I swooped onto the first bus attendant I saw to confirm where I should line up for my bus (the one for Kosuge no Yu 小菅の湯). I had perhaps a dozen people ahead of me but I still managed to snag one of the last seats.

On the return, I sacrificed some bath time in order to get to the bus stop ten minutes early. I was third in line which doesn’t necessarily guarantee a seat since the bus starts further up the valley. When the bus turned up, the line behind me had grown to a dozen people and there were only about 5 seats left. My gamble had paid off and I got a good seat too, one with space for my long legs.

There was some traffic on the way back and I was worried that I would miss the last direct train back to Shinjuku but thanks to the experienced driver we got to the station with time to spare. Repeating the same strategy as in the morning (move quickly, well-charged pasmo, skip bathroom break) I got a good seat on the train and the return was as smooth as one could hope for. Obviously these tricks only work if you are hiking by yourself or maybe as a pair (or you have good bladder control).

As for the hike itself, it was the kind I like. Steep ascents at the beginning, gently sloping ridge line in the middle, alternating views of forest and mountains, and a good wide path for most of the descent. I only crossed a small group of people during the whole hike. Unfortunately I can’t recommend this hike since at times the trail was hard to find / follow and the last part of the trail had somewhat collapsed and was difficult to walk. I hope they repair it soon and also put up more trail makers.

One final note: the Nomekoi Hot spring is only 300 yen but at present the rotemburo (outside bath) is closed for construction. However the inside bath has a high wooden slanting roof which gives it a traditional feel so it is definitely worth taking a bath there.