This 300-famous mountain jutting out of the Northern tip of the Hakone outer crater, is one of the easiest, and most popular, climbs in the area. I first found out about it from my Kanto hiking book, and realised that I had already seen its pointy top from the train while traveling by train along the Shonan coast. The main attraction seemed to be the unobstructed view of Mt Fuji from the top, but would Japan’s famous volcano be clear of clouds the day of my hike? and with how many other hikers would I have to share the summit with?

Hiking in the Fuji-Hakone-Izu National Park

Ask for a hiking plan for Mt Kintoki

I took a bus from Hakone-Yumoto station bound for Gotemba, but got off around 9am at the entrance of Kintoki Shrine 金時神社 about 30 minutes later (it’s before the tunnel that passes under the outer crater). The bus was fairly empty, slightly unusual for Hakone. However the parking lot next to the shrine was nearly full. These were the days when the highway toll was a flat fee of 1000 yen on weekends, a kind of stimulus put in place after the Lehman shock (as it is called here). The first part of the hike was fairly easy; it took one hour along a winding trail to reach the top of the rim.  There were some nice views of the outer crater, with Mt Mikuni above lake Ashi directly opposite, and Mt Koma to its left. 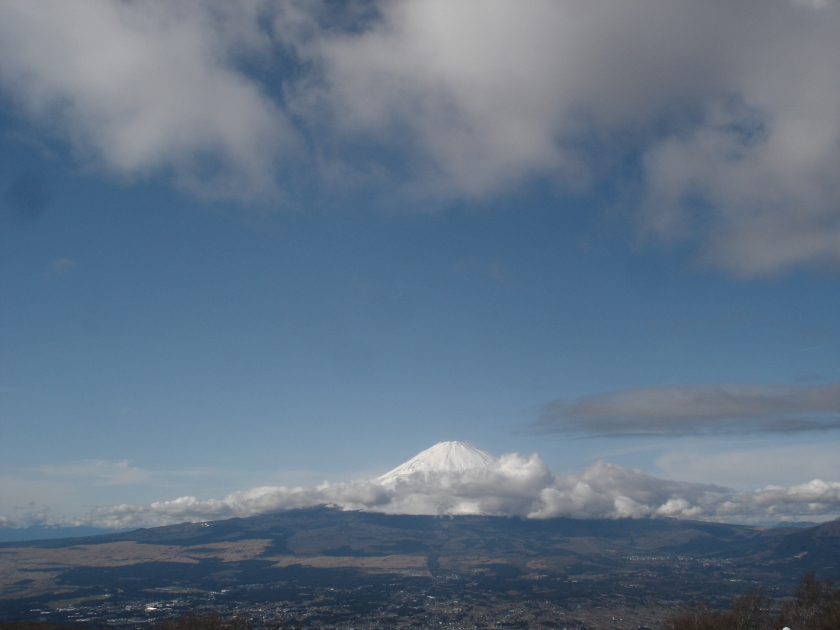 My best shot of Mt Fuji

Turning left, it took another 20 minutes of steep climbing to reach the top of Mt Kintoki 金時山 (kintokiyama or kintokizan). The trees on this section were small, rather like big bushes, and bare of leaves since it was the middle of December. As expected, the top was packed with people and nearly all benches were taken. It seemed to be a popular place to have lunch while enjoying the view of majestic Fuji. Today, the giant was wrapped in grey clouds,  with only its white top showing itself.  It wasn’t the best view I had ever had, but it was still impressive.

Another hiker gazing at Mt Koma, the highest point of Hakone

I found a spot to sit for lunch. In all directions it was mostly blue skies, and I had a great view of the impressive Hakone crater with the Suruga Bay in the background. This was undoubtedly one of the best views of the Kanto area within close reach of Tokyo. After lunch, I went back down the same way but instead of going back to the shrine, I followed the rim a little further East. The path was lined with tall bamboo grass on both sides, but it wasn’t high enough to block out the view of Mt Myojin ahead. At Yagurasawa Pass 矢倉沢峠, I turned right and headed down. The trail was steep this time, and I had to be careful not to slip. Half an hour later, I was back on the road.

Although it was a short hike, I didn’t mind since December days are also short. I definitely want to try my luck again to see Mt Fuji completely free of clouds from the top. One more good point about Hakone, is that there are many hot spring hotels. So after completing the hike in about four hours, I was able to have a nice hot soak before making my way back to Tokyo.

Ask for a hiking plan for Mt Kintoki

See the panoramic view from the top of Mt Kintoki