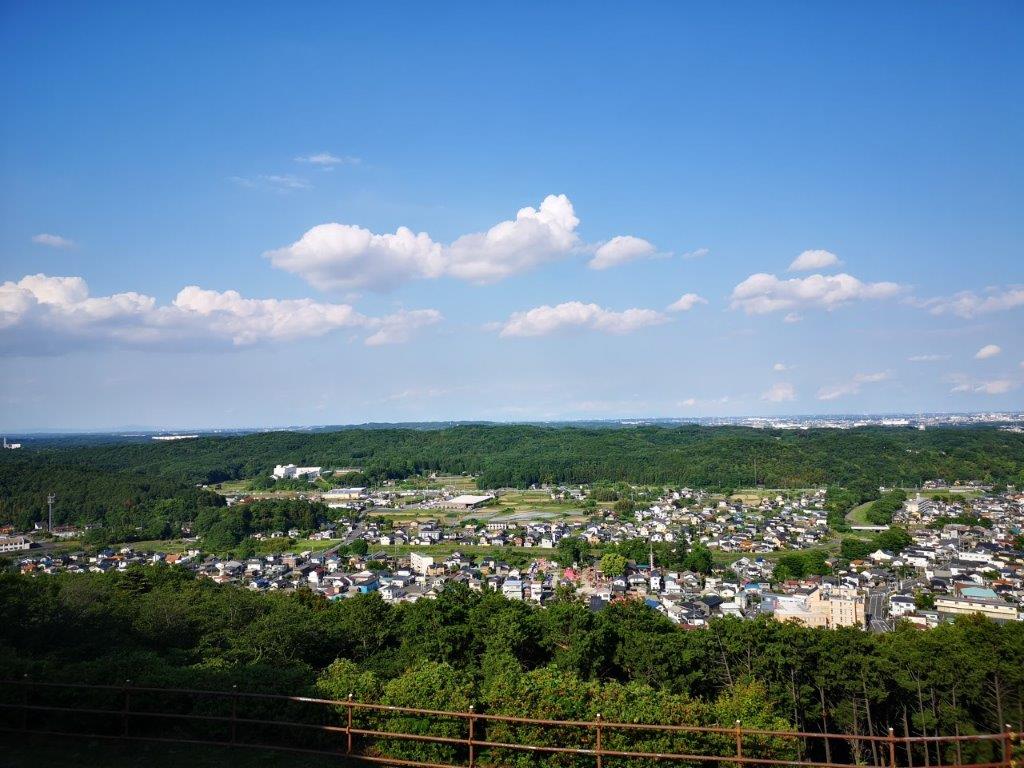 I wanted to do a late afternoon hike close to Tokyo since the weather had suddenly become quite warm; I also wanted to try out the camera of my new smartphone. I chose a relatively low mountain I had climbed six years ago, which I could redo using different trails. I would take a train to Ogose in the early afternoon, have a soba lunch near the station, and finish the hike at a hot spring facility, newly opened since my previous visit; afterwards, I could use the onsen shuttle bus to return to Ogose. The weather was supposed to be sunny in the daytime and overcast in the evening. I was looking forward to doing another hike in the forests on the eastern edge of Oku-Musashi.

View from the top of Mt Otakatori

I arrived at Ogose station at 2pm, the hottest time of the day, and quickly made my way to Yoshiro (よしひろ), which I reached just at the end of the lunch time. After a satisfying soba meal, I walked another 15 minutes to the start of the trail inside the Go-Daison Azalea Park (五大尊つつじ公園). The flowering season was already over and the park was deserted. I found a small path through the forest, not on my map, but which led to a viewpoint of Ogose Town at the Tomb of the Unknown Soldier of the World (世界無名戦士之墓), on the 2nd floor of a gleaming white monument.

Path to the tomb of the unknown soldier of the world

View from the monument of the unknown soldier

I had an excellent view of the Kanto plain thanks to the clear May weather, despite being less than 200 meters high. Behind the monument was the start of the trail up today’s mountain. It was about 4pm and the temperature was just right for some light hiking. After a short climb, I arrived at Nishiyama-Takatori (西山高取 271m), not a summit, but a shoulder on the mountain with a view east through the trees. It was also the intersection of several paths; after checking my map, I went south down some steps, before turning right at a T-junction.

Steps leading down from Nishiyama-Takatori

A trail mostly through the forest

I followed a pleasant level path through the green forest, stopping now and then to listen the sound of birds singing. I passed a group of white limestone rocks (白石様 shiraishi-sama) and a minor summit named Mt Nekko (根っ子山 324m), both completely in the trees. Around 5pm, I started to climb again, and after reaching a forested ridgeline, turned left. A few minutes later I was on the top of Mt Otakatori (大高取山 おおたかとりやま ootakatoriyama), where I had a view eastwards through a break in the trees. After a short break, I continued south along the summit ridge, reaching another minor peak, Mt Katsuragi (桂木山 367m) just before 5h30.

An easy to walk trail

The gloom was starting to gather, so I took the next path down, a shortcut according to a handwritten sign. I had passed some hikers earlier, but now I was all alone, except for a large animal I heard but never saw. The path became level and easy to walk, luckily, since visibility was dropping fast. Around 6pm, I passed another viewpoint on top of a hill, but not much to see under the grey clouds. A few minutes later I emerged onto a road inside O-Park Ogose ( オーパークおごせ). After a quick hot bath, I boarded the free shuttle bus for Ogose station where I caught the Tobu line for the one hour ride back to Ikebukuro.