I had been to Shiga Kogen once before, but I had done it as an overnight trip, staying at Kusatsu Onsen on the way. This time I wanted to see whether it was possible to do it as a day hike, by using the Shinkansen to approach from from the Nagano side. I was also curious to see how crowded public transportation would be this far from Tokyo. The temperature in Tokyo was supposed to exceed 35 degrees, so I was worried that it might be too hot for comfortable hiking. Finally, I was hoping for clearer weather this time round; last time, thick clouds rolled in around noon and hid a lot of the views. This is an original hike spanning the central part of the Joshin-Etsu National Park. 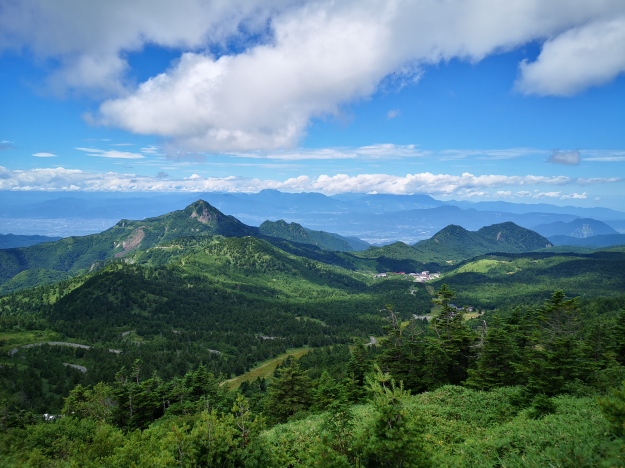 In the foreground, Mt Kasa, in the background, Togakushi Highland 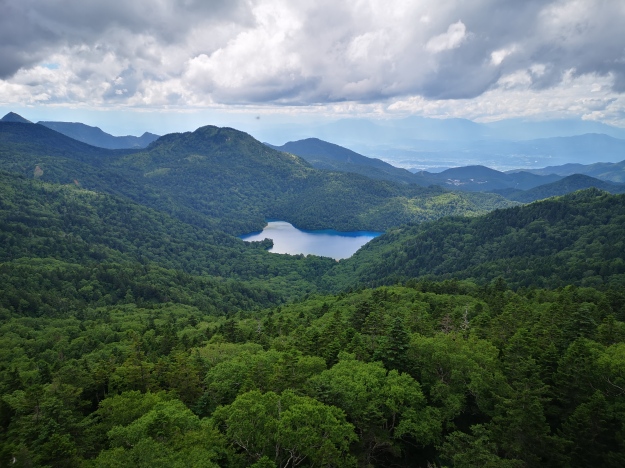 I arrived at Nozomi のぞみ just below Mt Yokote at 10h40 after a four hour journey that included a regular train, the shinkansen, a limited express and a bus. As I had hoped, the final train and the bus were nearly empty, most people having come by car. It took me about an hour to reach the top of Mt Hachi (鉢山 hachiyama) －sadly no view from the top. The descent was pretty tough, the trail being in urgent need of maintenance. It’s possible to skip this summit by starting from Hotaru Onsen instead. 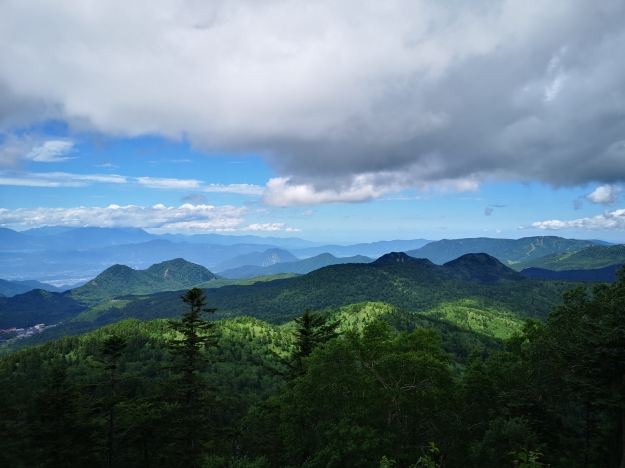 Today’s hike, from the top of Mt Yokote, lit up by the sun 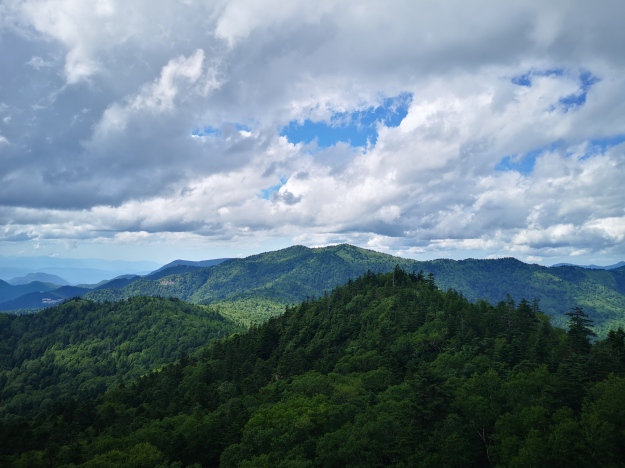 The final, and highest section, of today’s hike

The next section was mostly flat and easy, the views obscured by head-high bamboo grass growing on both sides of the trail. There were a couple of spots where the views to the East opened up, and I was able to see Mt Yokote and, further away, Mt Haruna. Looking up, I was still able to enjoy the blue sky and white clouds. I didn’t feel too hot thanks to the combination of clouds and light wind. I saw about three toads along the trail, but I couldn’t get any good pictures or video before they hopped under the bamboo grass. 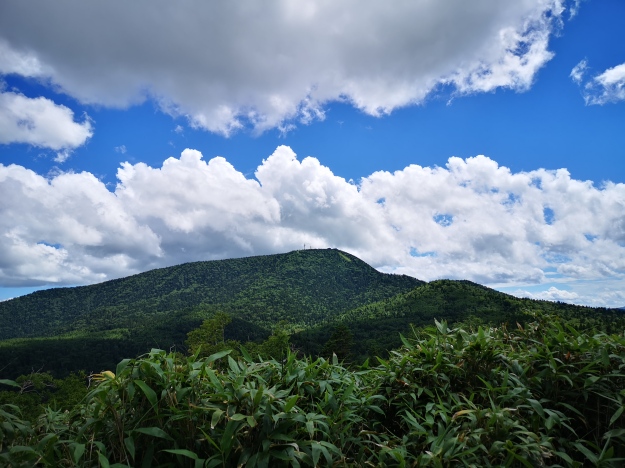 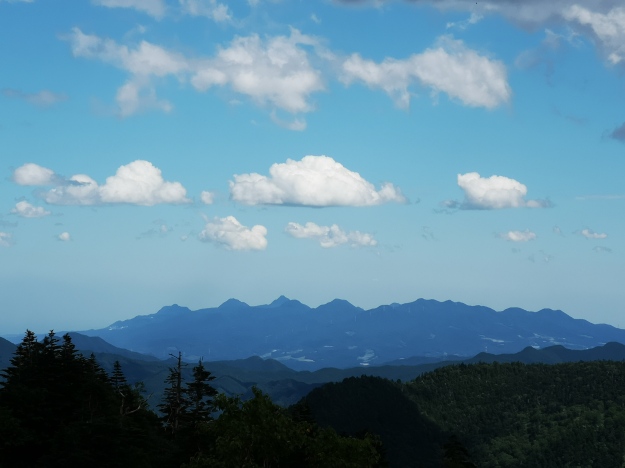 I didn’t expect to see Mt Haruna so clearly today

After a short climb, I reached the rocky top of Mt Akaishi (赤石山 akaishiyama) just after 2pm. From the summit, I could see the whole of Shiga Kogen. South was Mt Yokote, West was Onuma Lake and Mt Shiga, North was Mt Iwasuge (which I hope to climb in the future), and East was Mt Haruna. Despite the threat of thunderstorms, good weather prevailed, and I was able to see views that had been denied to me on my previous visit. 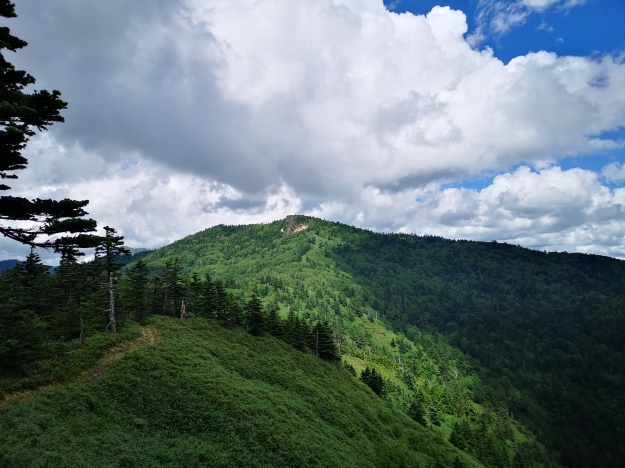 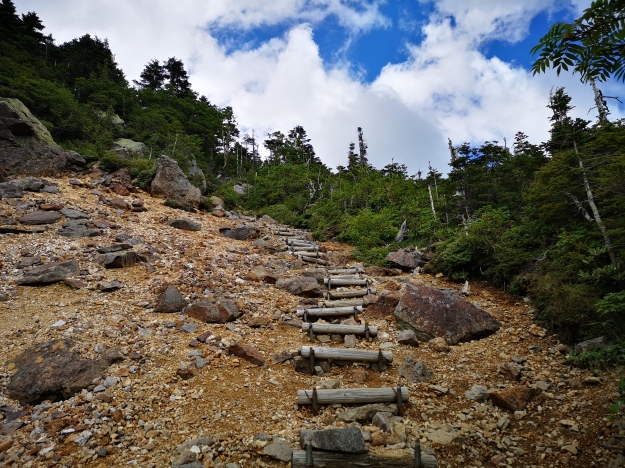 The final meters before the top of Mt Akaishi

After a short lunch break, I set off again. The path headed down steeply, then was level for a while, before climbing again. I passed the top of Mt Terakoya (寺子屋山 terakoyayama), surrounded by trees, but didn’t stop long since I was slightly behind schedule. Very soon, I emerged from the trees and I could see my final destination, the top of the Higashi-Tateyama Gondola Lift, which I reached at 4pm (last Gondola down at 4h20). I could have walked down to the base and bus stop, but then I wouldn’t have had time to take a much-needed hot spring bath at Hotel Higashidate. I was the sole passenger on the bus ride back to Yudanaka station. 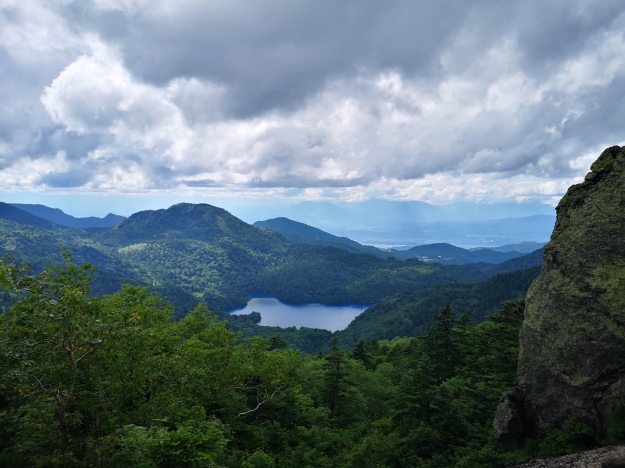 Onuma lake with Mt Shiga behind 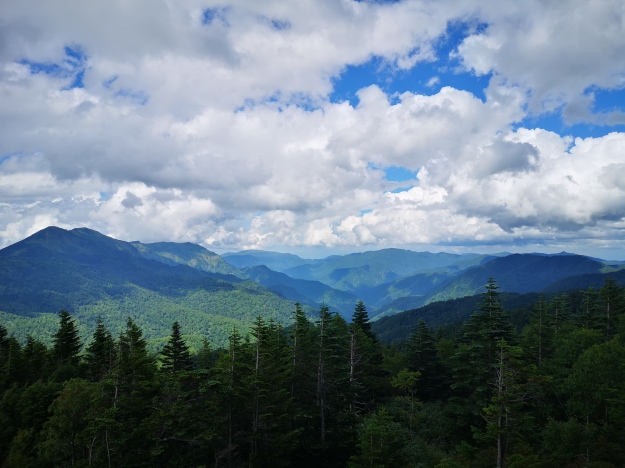 Although it’s a long way there and back, not to mention the price, I was very satisfied to be able to hike in such beautiful surroundings; at times, I could only see mountains in every direction. This hike is also special in the sense that I could start and finish at around 2000 meters high, a good altitude for hiking in the summer. Finally, because it’s so far from the capital, there were few other hikers so I really had the mountains to myself. 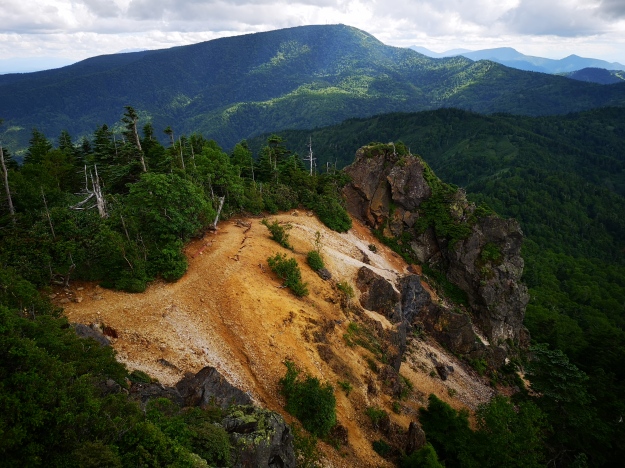 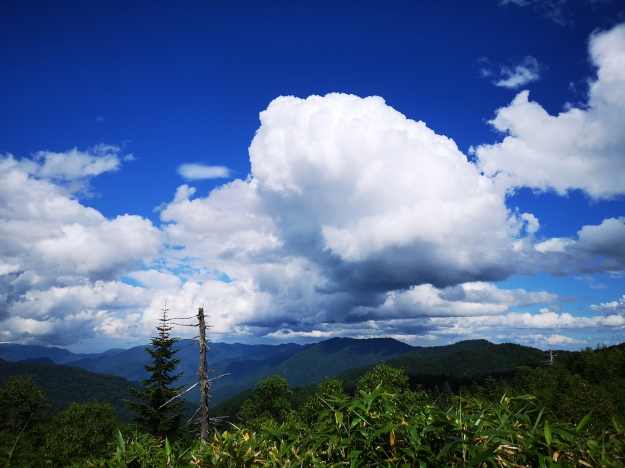