This was my 4th trip to Mt Akagi, but my first time by car. This ancient volcano has many peaks and trails surrounding the top crater, making it a great hiking destination for all levels. On my previous visit, I followed a little-used trail down a beautiful river valley. I was looking to repeat that experience, but on the other side of the mountain. As usual, I was concerned about the weather. The forecast called for rain showers, but I hoped that there would be an equal amount of sunshine.

I arrived at the Konuma Parking lot around 1pm in sunny weather. Today’s hike was relatively short so I stopped for an early soba lunch on the way. The moment I set off, thicks clouds rolled in, followed by some light rain. Fortunately, there was no wind and the temperature was comfortable. It took me barely half an hour to reach the top of Mt Choshichiro (長七郎山 choushichirousan), less than 100 meters higher than my starting point. The rain had let up, but all I could see was white cloud…and lots of dragonflies.

Do you dare to walk under?

The East side of Mt Akagi

After this nice warm-up, I continued down the other side. This path was steep, and some sections had been washed away, maybe by last year’s powerful typhoons. Ten minutes later, I reached a four-way intersection with a sign. I took the path opposite for Otogi no Mori オトギの森, meaning fairytale forest. There were many paths but almost no signs; most joined up a little further down; a few headed down to the Kasu river on the right. I avoided the latter since from my pre-hike research I knew that the area around the river had been damaged by typhoons.

A hidden river valley near the top of Mt Akagi

Otogi no Mori or Fairytale Forest

Eventually I reached the center of Otogi no mori, a flat quite area with many impressive oak trees, possible “konara“, and a view across the river valley. Continuing straight along the sole remaining path, I soon reached another intersection where I turned right towards Cha-no-ki-batake Pass (茶ノ木畑峠). Here it was possible to hike down to a waterfall and Akagi hot spring, but that will be a hike for another day. I turned right again, and followed the ridge. It was an easy walk, but the views through the trees were lost in the cloud.

Ropes to help the hiker

For once the bamboo grass was replaced with regular grass

Very soon, the path started to descend steeply. It was slippery because of the recent rain, but I managed to reach the river without any mishaps. I hadn’t expected to find such a beautiful river valley on the upper slopes of Mt Akagi. There was no one else and it felt lonely and mysterious. At the end, the water was funnelled through a narrow opening between some rocks and disappeared into a dark cave – quite an interesting and unexpected sight. It’s called Choushi no Garan 銚子の伽藍 (“choshi” is a kind of sake container, narrow at the top and wide at the base). 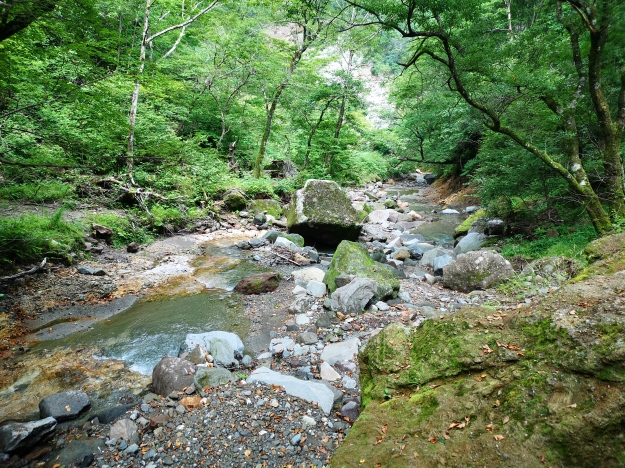 The Kasu river valley, a fun place to explore

All the water from the river disappeared into a rocky tunnel

It was now 4pm, and it had started raining softly again. The trail continued up the other side of the mountain, but it was steep, muddy and overgrown with bamboo grass, so I decided to head back the same way. Soon, the rain stopped again and some sun broke through. I took a different and more direct path back through Fairytale Forest and reached Konuma lake around 5pm. I had an amazing view of the lake through the mist, with Mt Jizo and its TV antenna behind. From a distance, it looked like the spires of a fairytale castle. While walking back to the my car, I had one more surprise – a couple of deer bounding away through the forest.

The “towers” of Jizo

Konuma Lake in the late afternoon

I was glad I was able to discover another great river valley, although there was no path next to it. The weather was good enough for hiking, but I’ll need to return on a sunny day for the views, probably in the Spring of the Autumn.

Check out “Choushi no Garan” on Mt Akagi