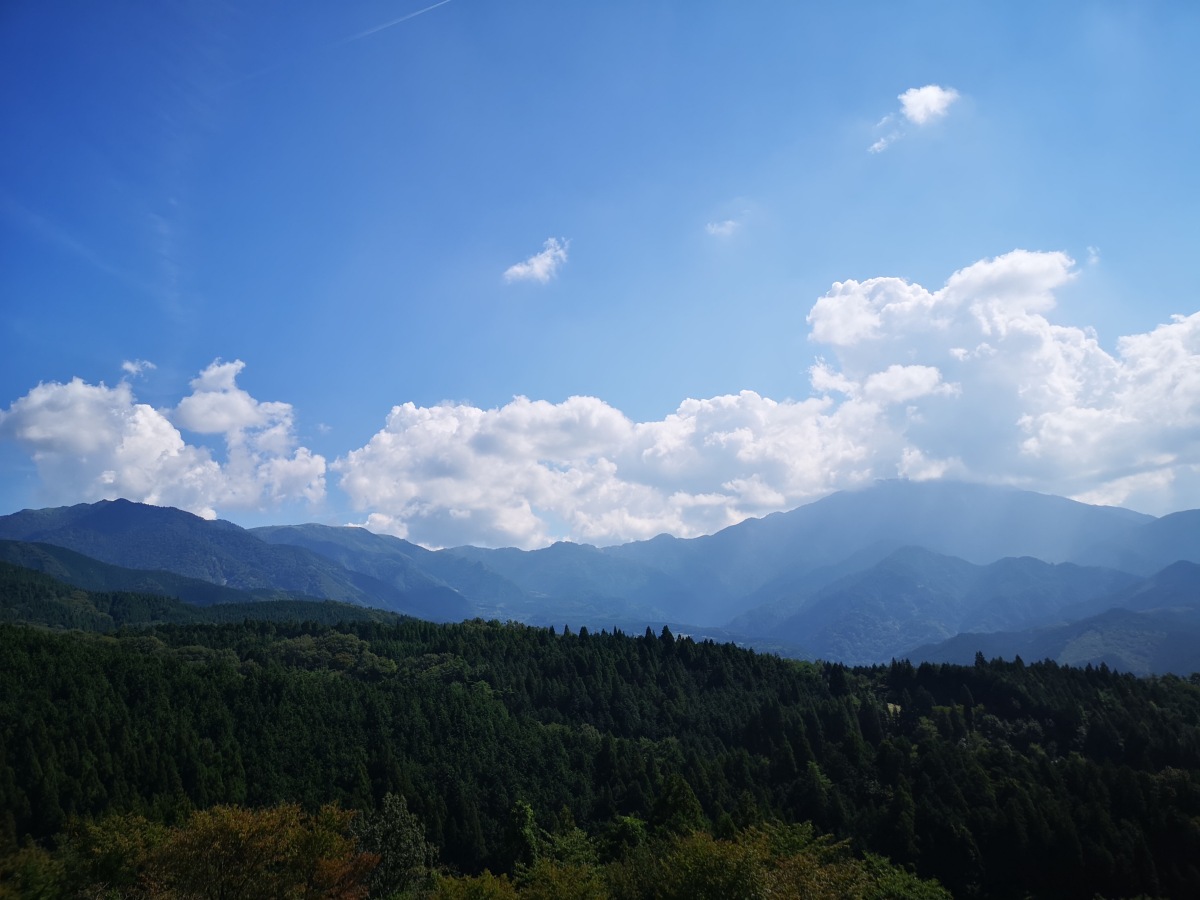 I had been planning to hike the old Nakasendo highway (中山道) between two of its most famous post towns, Magome-Juku and Tsumago-Juku, for ages. However, since it required an overnight stay, it kept on getting postponed for various reasons. Finally, at the beginning of autumn, all the pieces fell together, and I managed to organise a trip there. The weather forecast was good: mostly sunny then cloudy from the afternoon of the second day. I knew it was a popular sightseeing spot, but off the beaten track for overseas visitors, so it felt worthwhile to share the experience. This was my second trip to the area: in February 2013, I had visited Narai-Juku, another famous post town, and followed this old highway over a mountain pass, and down to the next post town of Yabuhara-Juku. There was about half a meter of snow near the top of the pass, and a troop of monkeys on the move in the surrounding forest. I didn’t expect this hike to be quite as adventurous, but I was looking forward to hiking through pristine nature in the heart of the Kiso mountains.

Walking up the main street of Magome-Juku

The bus from Shinjuku dropped me off in the middle of nowhere, about a hundred meters off the expressway exit. Fortunately, I soon spotted an English sign informing me that I was still 2 kilometers from Magome-Juku. I walked along a small paved road through pleasant countryside, and then ducked down a dirt path leading to a wooden footbridge over a stream. I reached the edge of Magome post town (馬籠宿 magone-juku) a little before noon. I slowly made my way up a steep, curving slope that crossed the entire town. I thought that the contrast of traditional houses and clouds on the horizon was especially beautiful; I could easily imagine tired travellers looking for a place to rest after a long day of plodding through the mountains. Near the top of the town, I stopped for a tasty soba lunch at Keiseian (恵盛庵) inside a charming old house.

View of Mt Ena, the summit hidden in the clouds

This staircase marks the start of the Nakasendo hiking trail

Just past the restaurant was the old bulletin board where travelers could leave messages for one another, a kind of ancient social media system. A little further was a lookout point, where I could gaze at Mt Ena (2191m), a hundred-famous mountain of Japan, climbed a few years ago. Next, I had to make a small detour around somebody’s garden to reach the official start of the hiking trail. After walking down some steps, I crossed the modern road connecting the two post towns, walked down some more steps, and then followed a dirt path next to a stream. I had to be careful not to step on the small green-coloured frog taking a break in the middle of the trail. I crossed the road again, and bought some water from a shop on the left side; the early October weather was turning out to be warmer than expected. I continued along a paved road slowly rising through a sleepy village. I spotted another frog, brown this time, squatting on the trail.

First I spotted a green frog…

At 2pm, I finally reached Magome Pass, the highest point of the hike at 801 meters; I would now leave Gifu prefecture and enter Nagano. Straight ahead, I could see the summit of Mt Nagiso (1679m), popping out from above the treetops, and which I hope to climb one day. I thought that this was the nicest part of the hike: it followed an easy-to-walk path heading down the valley through a conifer forest. I could easily imagine myself in the Edo period, since there were few other hikers to remind me of modern times. Halfway down, I reached a spacious rest house; I was beckoned inside by the owner, made to sit at a long wooden table, and offered some cold green tea and slices of Japanese peach (“nashi”). Once again, an excellent example of Japanese hospitality. After setting off again, I crossed a bridge over a mountain stream, and a little later on, made a small detour to see a couple of waterfalls, simply called Male and Female waterfalls (男滝・女滝 odaki-medaki).

Mountain stream on the Nagano side of the hike

The male waterfall, not surprisingly, the bigger of the two

Around 3h30, the trail left the forest at the bottom of the valley, and continued next to the modern road. It took me another half an hour to reach my destination, Tsumago post town (妻籠宿 tsumago-juku). Here, the central road was straight and level, with an impressive view of Mt Nagiso in the background. It was lined with traditional wooden houses on each side, coated in a black substance, a common Edo period fire prevention measure. I thought that his post town was even nicer than the previous one: there were less sightseers, and it felt peaceful and remote. After visiting a couple of famous houses turned museums, I took a taxi to my hotel. The next day, I rode the train along the Kiso valley to Narai post town (奈良井宿 narai-juku), where I did some more sightseeing, before catching the bus back to Shinjuku.

Returning to the road at the bottom of the valley

Watch waterfalls and frogs on the Nakasendo