This hike follows the Western half of the caldera around Onuma lake 大沼 on Mt Akagi, passing several minor peaks opposite the highest point of this dormant volcano, Mt Kurobi 1828m (you can include it to make a longer hike). Mt Akagi is known as a hyakumeizan, and many people visit just to go up and down Mt Kurobi. However, like Mt Haruna closeby, there are many smaller mountains and hiking trails that are worth exploring (like Mt Suzu).

HOW TO GET THERE: Take the train to Maebashi (I took the shinkansen to save time), then a bus to the Akagi visitor centre. Some guy was handing out brochures about Mt Akagi to every person on the bus and, after we departed, was giving explanations about Mt Akagi through a microphone nearly the whole way. Slightly annoying but I still managed to doze off eventually (this doesn’t happen every time though).

The bus was pretty full and everybody got off one stop before the end. This was the closest stop to the lake. However the start of the Mt Akagi hiking trail is between that stop and the visitor stop (the terminus), so it doesn’t really matter where you alight.

Ask for a hiking plan for Mt Akagi

THE ROUTE: It took about 30 minutes along the road from the visitor center to the Akagi campsite on the other side of the lake. The start of the hike was tricky to find – according to the map, the trail started before the camp site when actually it started from within, just behind the toilets. I had actually given up after walking up and down the road looking for any trace of a trail, and finally spotted it when I decided to go to the bathroom.

It was a nice signposted trail that quickly headed past a few holiday houses and then up the mountain. The lake is already at 1350m so there really wasn’t much climbing needed to get to the caldera ridge (around 1500m). The main trail went left, but I first walked about 50 meters to the right and got to a small rise called Mt Ashigara 1474m (足柄山) according to the map (there was no summit marker).

View from the summit of Mt Debari

I retraced my steps, circling the caldera counter-clockwise, and arrived at Mt Jingasa (陣笠山 jingasayama) with a summit marker and views of Mt Akagi. A little further on I reached the summit of Mt Yakushi (薬師山 yakushidake). There was really no one on the ridge which was amazing considering the amount of people on Mt Akagi. Afterwards, the path suddenly changed direction, heading over the ridge and down the other side. Mt Akagi has a jumble of peaks, and at times it can be a little disorientating. However very soon the path turned again into the right direction, and before I knew it I was on the top of Mt Debari (出張山 debariyama).

Mt Debari was the best summit by far with lots of places to sit, and some very nice views of Mt Kurobi and Lake Ono. After spending some time there I moved on and slowly started going down the caldera back to lake level. There were several paths going down to the left signposted to some nature house, but the correct path is straight ahead until a T junction. At this stage, I turned right towards the lake (the path heading down to the right is the Kanto Fureai no michi – see Mt Suzu above).

Eventually I reached the lake and walked along the road for about 20 minutes. With the sun in my back, it was a good place to take photos of Lake Ono. After passing some houses, I saw a sign for an observation platform going up a steep field on the right. After the steep climb the path became level, and after going through some forest, it took me to the treeless summit of Mt Miharashi (見晴山). There was an observation platform just a little down the path on the other side but the view was similar to the one observed earlier. The path continued a short way to the road from Maebashi. 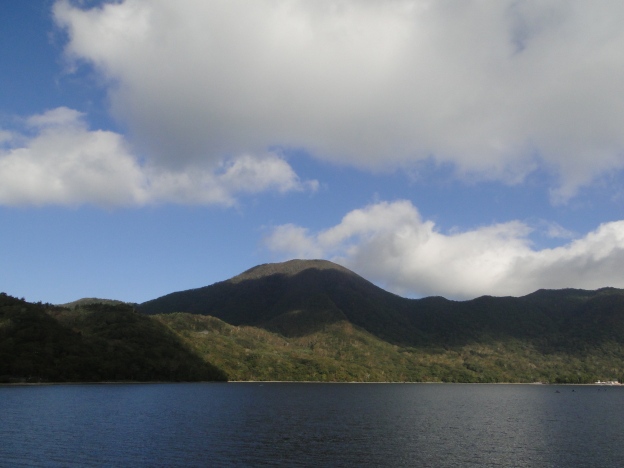 View from the lake shore

On the other side of the road was the start of the trail for Mt Jizoh (1673m). I hiked it on a separate trip to Mt Akagi, but it makes a good extension if one has enough energy and time left. Today it was already late, so instead I followed a nice wide and mostly flat hiking path going around its base before connecting with the main road again. From there it was straight back to the bus stop. A few meters before the Akagi visitor centre 赤城公園ビジターセンター there was a nice wooden cottage that doubles as a restaurant. I popped in to get a snack, and was warmly welcomed.  I was invited to sit in front of the fire and offered hot tea.  A nice place to wait if there is some time before the bus leaves.

CONCLUSION: An easy but fun hike up and down some relatively obscure peaks with nice lake views, suitable for anyone who wants to get away from the crowds. The main drawback is that unless you climb Mt Akagi as well (or have your own car) you will have to walk along the road to reach the start of the hike.

Ask for a hiking plan for Mt Akagi

View from the lowest peak of today’s hike