This 100 famous mountain of Yamanashi would deserve a place among the 200 or 300 famous mountains of Japan. It offers a challenging climb and a wide view from the top, including Mt Fuji and the South Alps. The trail is also easily accessible on foot from Sasago station on the Chuo line. Funnily enough, it’s not called a “yama” (mountain), but a “maru” (circle).

HOW TO GET THERE: Take the Chuo line from Shinjuku station and get off at Sasago station a couple of stops past Otsuki station. Don’t do like me: fall asleep and miss your stop. I was lucky to be able to get off two stations later, and catch a train back within ten minutes – there are only about 2 trains an hour out there.

Ask for a hiking plan for Honjagamaru

THE ROUTE: From Sasago station’s sole exit, walk up the road on the right. Within 50 meters you will reach a T-Junction. This was probably the most confusing part of the hike, since the hiking sign clearly points to the left, whereas my map indicated a right turn. According to the map the left trail was a hard to follow route to another summit on the same ridge. Since it was published 3 years ago, things may have changed.

I decided to go right anyway, and after walking along a dirt road for about 15 minutes, I was relieved to spot a sign for the trail entrance, pointing to a dirt trail going up the mountain on the left. I set off along it with renewed confidence, only to reach an unmarked branching barely ten meters further. The left branch followed the bottom of the valley, and the right one went literally straight up the mountain side.

Having already lost a significant amount of time by missing my station, and locating the trail entrance, I followed my gut instinct and went right. I guessed that the paths would probably join up later, as it often happens when you encounter an unmarked branching. They never did, and for the time being it was a mystery.

I quickly discovered that my chosen path was extremely steep – so steep that a couple of times I had to kick in the dirt with the tip of my hiking shoes to get a grip. The path was also very faint; I was starting to wonder whether it was the right choice after all when suddenly I saw a pink ribbon attached to a low branch, the unofficial trail marker throughout the area. The climb to the first shelf was intense, and left me gasping my breath at an electric pylon. After that it was easier going. The surrounding forest was beautiful and felt quite wild. 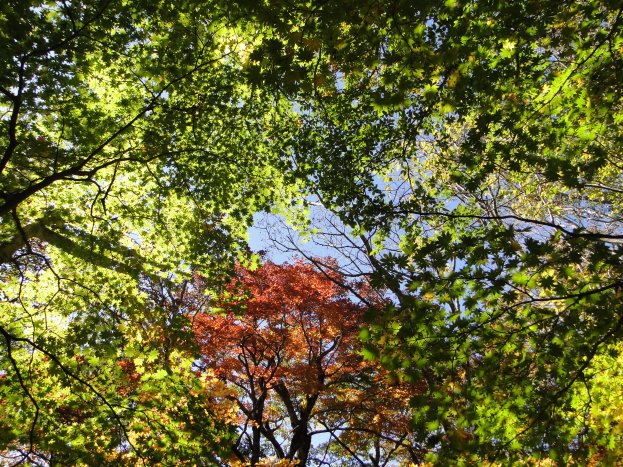 There was another confusing part about an hour after I started climbing, when the path disappeared into some dense vegetation, some sort of grass that had grown out of control. There wasn’t a clear path leading around it, so in the end I picked up a stick and literally beat a path through it myself. I finally emerged onto a road on the other side, as predicted by my map, and thus confirming that I was on the right path.

After the road, there was another very steep dirt path requiring more kicking. Eventually big rocks and boulders started appearing on either side of the path, a sure sign I was approaching the summit ridge. At last, I reached a minor summit 1377 meters high, but there wasn’t much of a view, so I soon continued along the ridge line.  After a while I got to see some beautiful autumn colours, looking amazing with the blue sky in the background.

Finally I started getting some glimpses of Mt Fuji. After confirming with a descending hiker that the summit had a clear view of Mt Fuji, I hurried along till I reached the summit of Honja-ga-maru 本社ヶ丸, and a stunning view. To the south was glorious Mt Fuji, so close I felt could touch it; in front and to the left was Mt Mitsutoge, a 200-famous mountain; to the West were the South Alps; to the North were Yatsugatake and the mountains of the Chichibu-Tama-Kai national park; the view to the East was hidden by trees. I found a good sitting spot on a rock with a view of Mt Fuji, and had by lunch.

After lingering as long as I dared, I started downhill, continuing along the ridge. There were several more excellent viewpoints on the way. The surrounding rocky scenery felt very wild. On the way, I scared away a family of partridges. At one point, there was a path leading down to Sasago station to the right. I ignored it since I intended to follow the ridge lime for some more time before heading down. 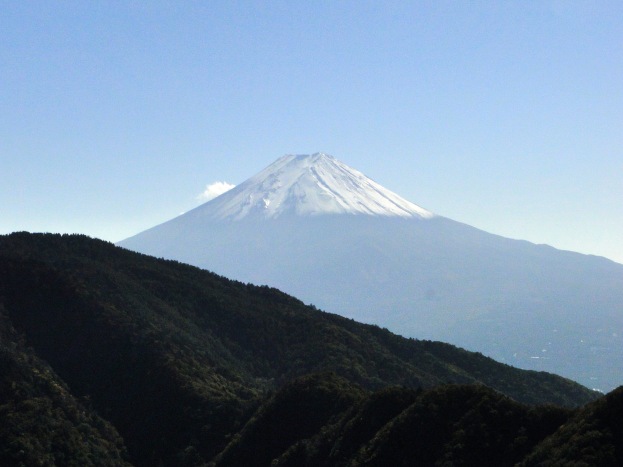 Mt Fuji in the autumn

Just after that there was another tricky part – the path switches back and goes down the opposite side of the mountain. This is the path to Mt Mitsutoge. Shortly after you go under the trees, there is small path leading right and following the ridge again. The sign has fallen down so it is easy to miss. At the fork for Mt Haccho (八丁山 haccho-yama), I turned right to get off the mountain. The round-trip to the top of this mountain takes barely 15 minutes, but I had to drop it since I had lingered too long at the summit, and was in a hurry to get down before it got dark.

View south from the top

A little further there was yet another tricky part. A little before Onna-zaka Pass (女坂峠 onnazaka-toge), there was a path to the right for Sasago station that wasn’t on the map. The route through 女坂峠 was longer and involved an up and down, whilst this new route was more direct. Actually, we were 3 hikers hesitating at this sign. In the end, as evening was arriving quickly, we all chose caution over adventure, and took the fastest route back to the station. Unfortunately, it was also probably the least beautiful option as it descended quickly through secondary forest. As a consolation, it did offer some nice views of Honja-ga-maru and the surrounding peaks.

Honjagamaru from near the end of the hike

Finally after going back and forth through some newly planted pines trees, the path joined up with the official map path. This was the path to the station I had ignored earlier. I was glad I had taken the ridge line path on the way up, since it was truly beautiful with many views. Soon after, the road became paved, and it was a pretty boring 40 minute-walk to the station. According to the map there was supposed to be a bath near the end of the hike. However the locals told me it had closed.

CONCLUSION: Strongly recommended if you are looking for a station to station quiet hike in beautiful forest with great views within 2 hours from Tokyo. The main drawbacks are some navigational difficulties and no onsen at the end.

Ask for a hiking plan for Honjagamaru