This was a short hike with easy access from Tokyo, perfect for the winter season. I took a train to Omata station on the Ryomo line, from where I walked about 45 minutes to the start of the trail, since there were no suitable buses in the morning. It was mostly straight ahead, with a view of today’s mountain: a long thin rocky ridge stretching Southwest to Northeast. 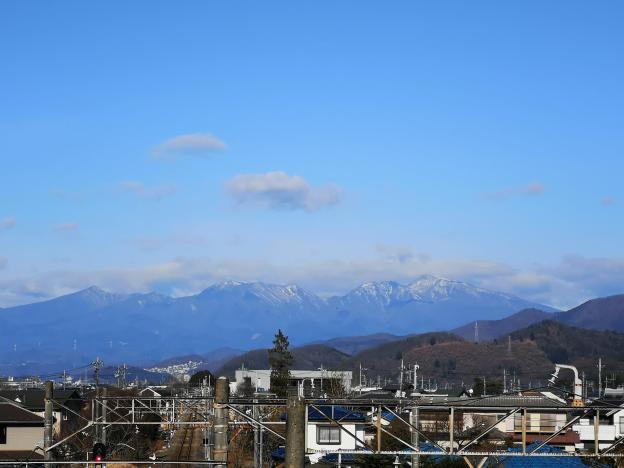 The start of the trail was near a small shrine, and I set off quickly since it was already past 11am. There was a notice saying that one of the trails down nearby Mt Senjin was closed due to fallen trees – I had walked that down path in 2018 and it was indeed nearly impassable! The climb up was through nice forest. Soon, it became steep and rocky. Turning around, I got some nice views of the Hachioji Hills and Mt Asama. Northwards, I could see Mt Akagi with snow on the upper reaches. 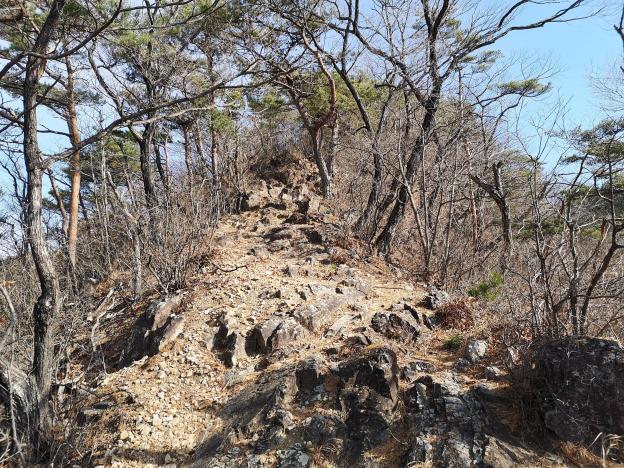 Steep climbing near the top

These were the only views I would get during the hike. If I had known, I would have sat down on those rocks and had an early lunch there. Further on, I could only get fleeting glances through the bare branches of the trees, even though my guidebook promised good views. The climb ended at a small shrine, and a nice flat area with a bench. It was already occupied by a group, so I continued along a level path. 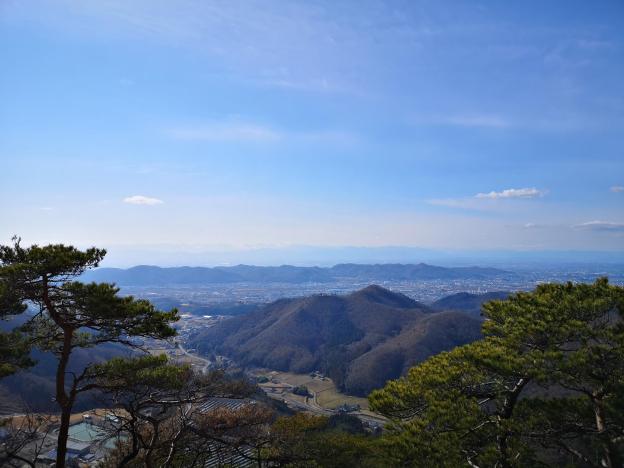 View of the Hachioji Hills halfway up the mountain

From this point the hike was fairly easy. I reached the top of Mt Sekison 石尊山, a combination of the characters for rock and respect, just after noon. Trees obstructed most of the view. Even though they were bare of leaves, it was impossible to take any good photos. I found a sunlit rock and sat down to have some lunch. It took me another thirty minutes along the summit ridge to reach the top of Mt Shinko 深高山, a combination of the characters for deep and high, another viewless summit.

View of Mt Akagi from the steep and rocky climb

I found another rock in the sun to sit on, and finished my lunch. From here, the trail went down steeply for a while, before becoming level again. Just before 2pm, I reached a crossroads above Inoko tunnel, very close to the end of the hike. There were two options for finishing the hike, to the left and the right, both about the same distance. I was headed right towards Matsuda, to the right, since there was a bus in about one hour. Since it was only 30 minutes away, I decided to check out the connecting trail for Mt Senjin which was straight ahead. 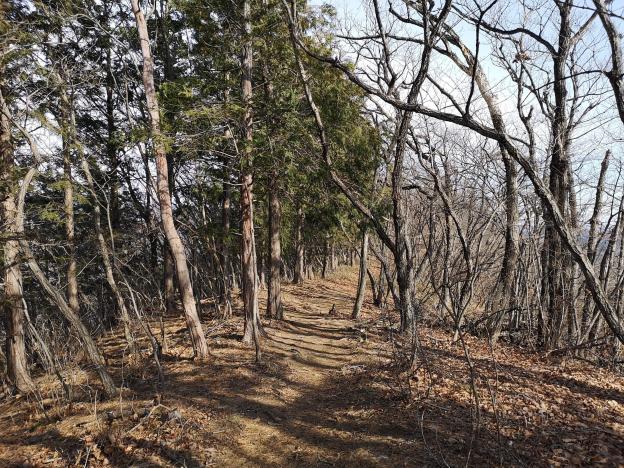 I hadn’t realised I could cross over to Mt Senjin, and I might have attempted it, if it had been earlier in the day. The path climbed steeply and I was hoping for some views. However, they didn’t materialise, and I finally turned back. Hopefully I can hike this trail in the future. I retraced my steps and took the path for Matsuda. At 2h30 I was out of the forest and on a road, and I reached the bus stop with time to spare. By the way, buses in the Ashikaga area costs a flat fee of 200 yen – a very good deal for hikers!

Mt Asama with its winter coat

NEXT UP: Tengu Rock & Akaboko in Tokyo