This was my third hike on this dormant volcano, and one of the three famous mountains of Gunma. It’s also a popular sightseeing spot – there was a long line at the bus stop, opposite the West exit of Takasaki station. I got the very last seat, which was lucky since the ride takes one hour (halfway there, they added a second bus for those standing). It turned out that most people were visiting Haruna Jinja, a 1400-year old shrine located on the Southern side of the volcano. Most people got off at the shrine – however I continued all the way to the last stop at the shore of Haruna lake. Once off the bus, I was stunned by the reflection of Mt Haruna-Fuji on the blue surface of the lake.

The first part of the hike was down the side of the mountain along the “Kanto Furenai no Michi” (関東ふれないの道). The path had suffered a bit from the recent typhoons, but was still walkable. The autumn leaves were still at their peak, and looked great in the clear autumn weather. At one point I passed an interesting rock formation, that looked to me like a kind of giant monster. Less than an hour after setting out I reached Haruna Shrine which I had passed earlier by bus. I decided to follow the masses of people and check out the shrine. Although it seemed like your typical Japanese shrine, I was impressed by the massive cedar trees. After reaching the main building, I retraced my steps and located the start of the trail, up a road closed to cars near the massive gate marking the entrance to the shrine. 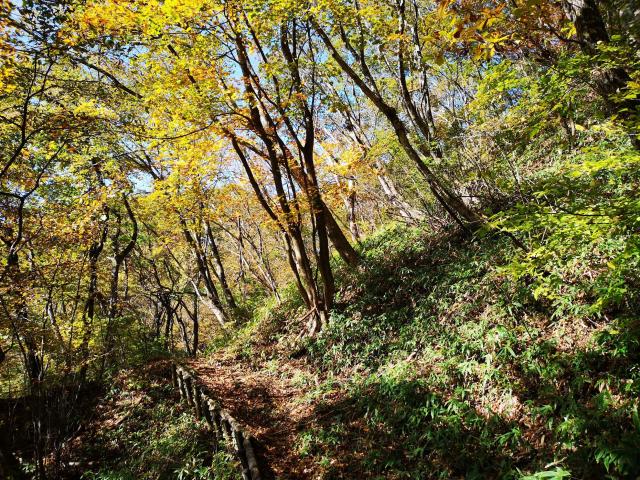 The road soon narrowed; for a short while a stream passed over it – its passage underneath having been blocked by stones, no doubt due to the recent typhoons. The start of the hiking trail was marked by a small red “torii”. A few minutes later, I lost the trail. I backtracked a bit, and after scanning the surrounding forest, I managed to pick it up again (a signpost would be good here). A little further, there was a steep, but short slope that brought to the top of a ridge, and a fork. I first headed right to the top of Mt Kyodai (1079m) 鏡台山, completely surrounded by trees. I retraced my steps, and followed the left fork, which brought me to a rocky outcrop and a great panoramic view of Mt Asama and Mt Myogi to the West. After a short break, I headed back, and continued along a very enjoyable and mostly level path with few people.

Beautiful autumn colours on the side of Mt Haruna

Eventually I got to another fork. To the right, was a peak with no view. To the left, the path, running alongside a series of miniature “torii”, led to the true summit of Mt Tengu 天狗山, which I reached around 2pm. There was an excellent view of the Kanto plain to the South, a few meters past the summit. Unfortunately, as with the previous viewpoint, it was against the sun so it didn’t photograph well. I enjoyed the rest of my lunch, perched on top of one of the huge boulders at the viewpoint. My guidebook suggested going back the same way, but I decided to make a loop hike along a slightly longer, less traveled way, following the ridge above the trail I had come on. 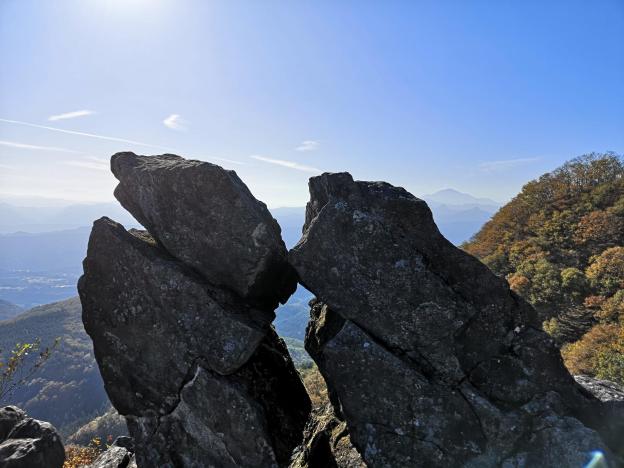 Kissing rocks near the top of Mt Tengu

The entrance to this trail was hard to spot – there was a very small sign pointing the way through the bamboo grass, and the trail was very faint. I had to constantly search for “yellow strips” attached to trees. It was an exciting path with great occasional glimpses of the higher peaks of Mt Haruna to the East. However, it was also nerve-wracking, since I was alone on the trail, and I had to be careful not to lose my way. It was starting to get late, and I wanted to be sure to complete the hike before nightfall. On the way, I passed the minor peaks (but also highest peaks of the day) of Mt Kokanehara (1225m) 小鐘原ヶ岳 and Mt Okanehara (1252m) 大鐘原ヶ岳. After the second summit, the path descended quickly, and I was even more careful checking for the yellow strips – I didn’t want to have to climb back up like I had done the previous month in the Tanzawa mountains!

I was relieved to finally reach Jizo pass, where I turned left off the ridge and down into the valley. However the path remained difficult to follow with few signposts. Thanks to some judicious pathfinding, I got on to a good path next to a pretty stream and finally managed to rejoin the road I had walked up a few hours earlier. I was back at Haruna Shrine a little after 4pm, and I had ample time to catch the now mostly empty bus back to Takasaki station. 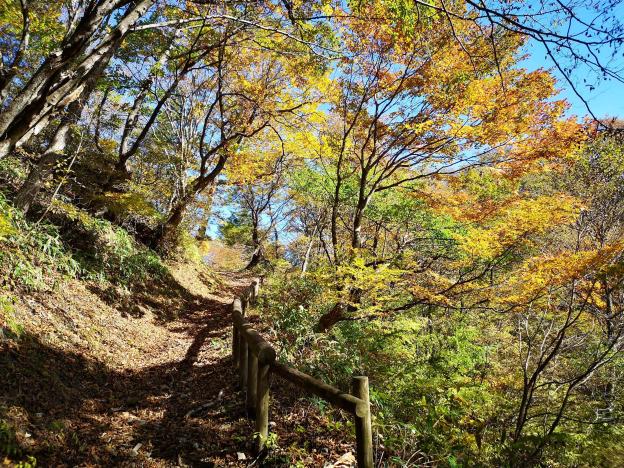 NEXT UP – Mt Suzu (Mt Akagi) in Gunma