These two hikes in Gunma prefecture are from August 2017, during another of my mother’s visits. We had taken the train to Takasaki the previous day, and had spent the night at Dormy Inn. In the morning, we used a Times Share car to drive to the base of Mt Nikko-Shirane. After our hike, we then made our way to Kusatsu-onsen on the other side of the Kanto plain, and spent the night at a hot spring hotel. The next day, we went to the base of another Shirane mountain – Mt Kusatsu-Shirane – after which we drove over to Shiga Highland to climb Mt Shiga. 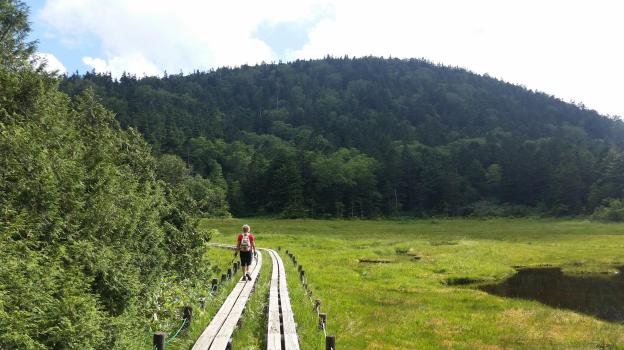 Since these two hikes weren’t day trips, they fall outside the scope of this blog, but they are in areas relatively close to Tokyo and inside National Parks, so they are well worth a visit. I think that each area is reachable from Tokyo as a day-trip using the Tokyo Wide Pass, and I might attempt it one day! 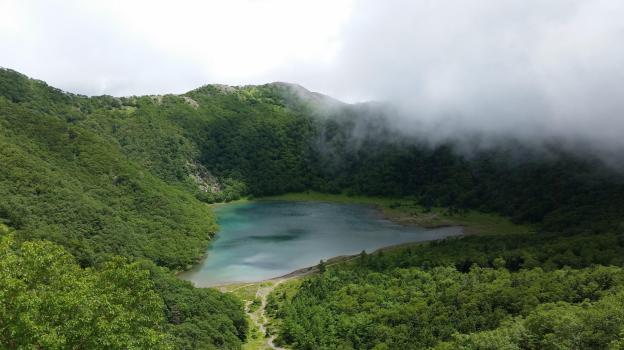 A beautiful lake high up in the mountains

The drive from Takasaki to the Nikko-Shirane Ropeway was fairly uneventful. Even though it was a weekday, I was surprised by how few people there were, especially since it was the middle of the summer holidays. The place is mainly a ski resort in the winter so perhaps people aren’t aware that it also runs from June to October. I love ropeways and I keep on discovering new ones – it’s amazing how many there are in Japan! 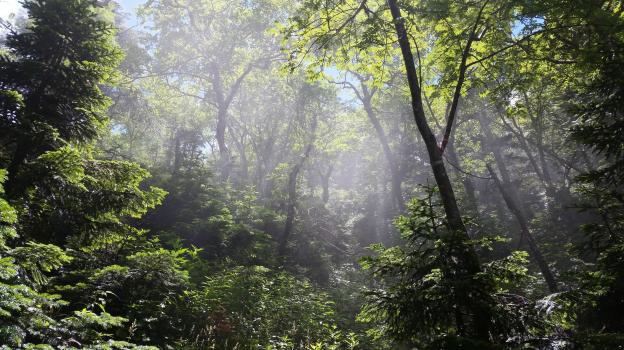 Sun shining through the forest

At the top of the ropeway, inside Nikko National Park and nearly 2000m high, the visibility wasn’t the best, and the views were a little disappointing. At least it was cooler than down in the valley. The hike started out on a fairly level trail through beautiful forest. After an hour or so, we had to climb steeply for a short while to reach the edge of a pond. Here I was able to look up towards the top of Mt Nikko-Shirane. I had been hoping to get my revenge, since it was in clouds when I climbed it several years ago. However, the top was in the clouds again, and another ascent seemed pointless. 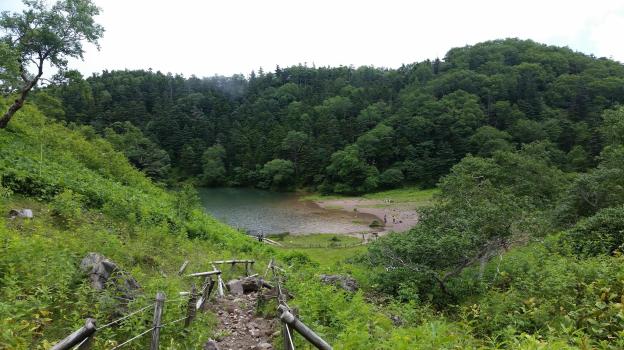 We continued a little further and reached the edge of a crater with at the bottom, the beautiful Goshiki-Numa lake 五色沼 (which means five-colour lake). Since we had enough time, I decided we could descend to the shore of the lake and climb back up again. Unfortunately the descent was steep and rocky, and we regretted it a bit.

The Goshiki-numa lake, inside Tochigi prefecture

After enjoying the peace and quiet of the lake, we made our way back up to the edge of the crater via a different path, and then walked back the way we had come. At the pond, we passed a group of noisy school children who had come up a different path. We headed back down the steep path to the forest below, and at the bottom we took another trail that looped back to the top of the ropeway.

View of Maru-numa lake from the ropeway

Check out the views of Nikko-Shirane

On the drive back we stopped at the very impressive Fukiware Waterfalls 吹割の滝 where we could walk along the river and the falls for a short way. Afterwards, we drove on to Kusatsu Hot Spring about 100km away, and we reached our ryokan after dark.

Where is all the water going?

Check out one of the famous waterfalls in Japan

Looking back towards Mt Shiga

The next morning was sunny, but by the time we had drove all the way up to Yugama Lake 湯釜 the clouds had rolled in. We admired the light blue colour of the crater lake, but gave up on climbing Mt Kusatsu-Shirane. I had climbed it before in the clouds, and had little interest in doing it again in similar conditions. 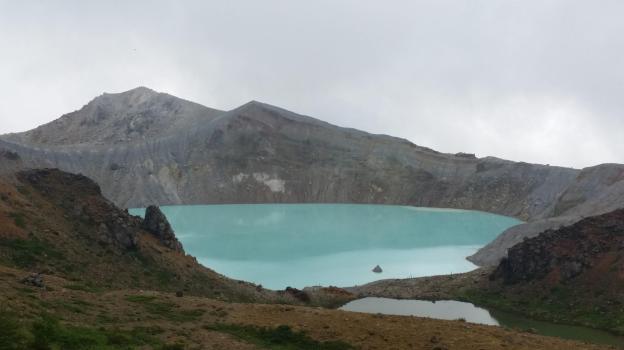 We drove on to Yokoteyama Ropeway which took us to the top of Mt Yokote 横手山. We got some nice views of Shiga Highland 志賀高原. Fortunately, the Nagano side was still free of clouds. We finally arrived at Kumanoyu (meaning the bear’s bath) where we left the car. We were now firmly inside Nagano prefecture. Another short ropeway took up to the start of the hike. Luckily, the weather was holding up. The first part was quite level. At one point the path went through some very high bamboo, higher than our heads, and I was worried about bears. So I reached into my bag to retrieve my bear bell only to realise that I had left it in the car!

View from the top of Mt Yokote

Soon the path started to climb. It was steep, with big rocks and protruding tree roots, making progress slow. The path slowly wound up the side of the mountain. We saw few people, and thankfully no bears. We reached the top of Mt Shiga 志賀山 just before 2 pm. A little way past the summit, there were some good views of Onuma-ike Lake below. The whole hike is inside the Joshin Etsu Kogen National Park and is very wild and beautiful.

We climbed down via a different path, spotting various small ponds on the way. Finally, after passing through a shinto gate or “torii”, we reached the base of the cone-shaped Mt Shiga. The next part involved walking along an elevated walkway through marshlands – much easier than the rocky path down the mountain! The final part back to the ropeway was along a wide and level path through the forest.

Onuma Lake in the middle of Shiga Highland

Since it was getting late, we decided not to take a bath at Kumanoyu, and leave right away. No sooner had we set off, that a dark shadow dashed across the road – it was a bear cub. It disappeared into the bushes opposite. We waited a bit for a mother bear, but she was nowhere to be seen. In any case the place certainly deserves its name!

On the way back, we stopped briefly for some photos at the marker for the highest national road in Japan at 2172m high. The drive down to Kusatsu onsen was through thick mist. We had a bath at the Sainokawara open-air bath, one of the biggest in Japan. After we were done, it started raining really hard, but we managed to get back to Takasaki safe and sound, a little after nightfall.

Hiking up and down Mt Shiga