These aren’t day trips, but they are Tokyo hikes, so I decided to include them in this blog. The Izu islands 伊豆諸島 are a group of islands Southeast of Tokyo prefecture – the furthest are the Ogasawara islands, a 24-hour ferry ride away! Last year, my mother visited Japan again, and together we made a visit to the closest island, Izu-Oshima 伊豆大島, and Kozushima Island 神津島, about 60km South of Oshima. 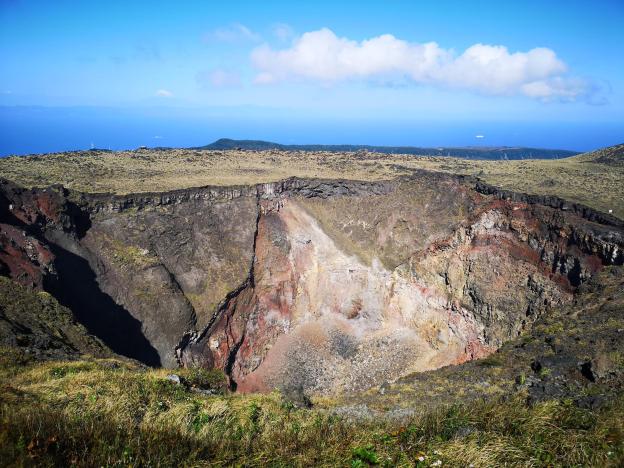 The impressive crater of Mt Mihara

I’ve had my eye on Mt Mihara 三原山 for a while, every since I first spotted it during one of my hikes along the Izu peninsula. It’s also an active volcano which last erupted in 1990, and thus has a spectacular crater. Although there are night ferries from Takeshiba pier to Oshima, I felt that it was wiser to take a daytime ferry and spend the night in Motomachi, the main town, so that we could leave refreshed the next day. 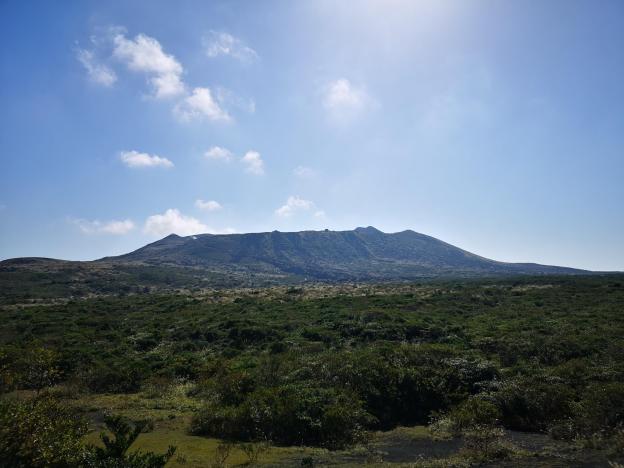 We were very lucky with the blue-sky weather. The views of the Izu peninsula and Mt Fuji from the Mihara Sancho Guchi bus stop were fantastic. At 9h30 we set off for the summit, and from the start we had great views of the flat mountain top. First, we hiked on a level road through shoulder-high (for me) vegetation. We saw a couple of tiny deer dart into the bushes. It wasn’t until I wrote this article that I found out that they are in fact called “Reeves’s muntjac” and they are not native to the island.

Very soon the road started the climb up the side of the volcano, and in no time we reached the top of the wide caldera. From there it was a fairly easy loop walk around the crater. There was an option to walk down towards the crater, but we decided to skip it since we were on a tight schedule.

An easy hiking path on an active volcano

There were beautiful views inwards of the smoking crater, as well as outwards of the Pacific ocean, and the other Izu islands to the South. Although it wasn’t particularly cold, it got windy at the higher points of the caldera. We reached the highest point on the Southern side just before 11am, and after a quick summit photo, we completed our loop of the caldera, and retraced our steps back to the start of the trail. All in all, in was a quick and easy hike with fantastic views. 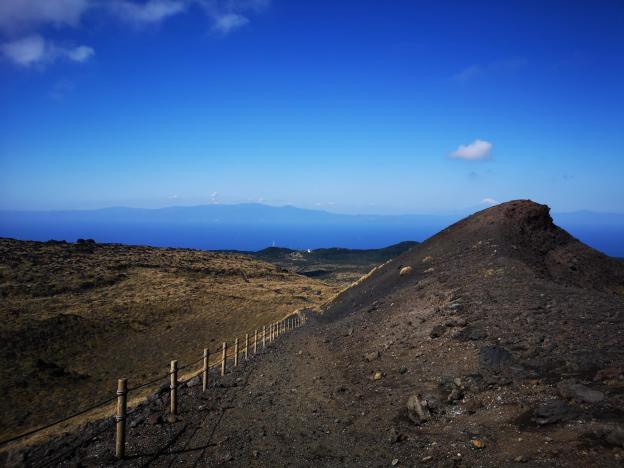 The following day we took the slow ferry two hours South to Kozu island. The highest point is Mt Tenjo 天上山, another volcano and a Kanto hundred famous mountain. The very friendly owner of La Familia hotel gave us a lift to the start of the trail. The first part consisted of a switchback along a steep slope divided into ten stations. As we climbed, the views of Kozushima and the ocean got better and better. Once we reached the end of the steep bit, we were hit with cold gusts of wind, a little surprising considering how many kilometers South of Tokyo we were.

Once we had bundled up, we took in the surrounding landscape. We seemed to arrive at a sort of plateau covered with a mix of low bushes and grass, punctuated with a number of low rounded summits. Without a map, it would have been hard to know which way to go. The hotel owner of La Familia, had kindly drawn a loop trail on a map, and we followed it religiously. There were a lot more clouds today and thus less sunshine, but fortunately no rain.

Fantastic landscape near the top of Mt Tenjo

First we headed to the center of the plateau to one of Mt Tenjo’s two sand deserts. Apparently, Kozu island residents think that the sands of Mt Tenjo form the only true desert of Japan, not the Tottori sand dunes. I’ve been to both, and both have merits. After some snapping some photos, we set off for the second sand desert, at the Southern end of the top plateau, where, from certain angles, you could think that you are really walking in the desert.

A few minutes away, there was a good viewpoint to the South. It was fun to watch a boat zip around a rocky island below in the distance. We were only 500 meters high, but it felt much higher since we were directly above the sea. We then set off Northwards, following the Eastern edge of the plateau. The path started to rise slightly, and we reached what is known as one of Tokyo’s top hundred views 新東京百景展望地. The view of the Tokyo islands we had passed the day before by ferry, sitting like white and green gems in the middle of the blue ocean, was indeed stunning.

After pulling ourselves away from the view, we set off for the true summit of Mt Tenjo, which we reached just before 4pm, a relatively late time in the shorter days of Autumn. There we could take in the entire plateau we had spent the whole afternoon traversing. More than half a kilometer below, was the village of Kozu island – it looked so far away, and we had to walk all the way back down! 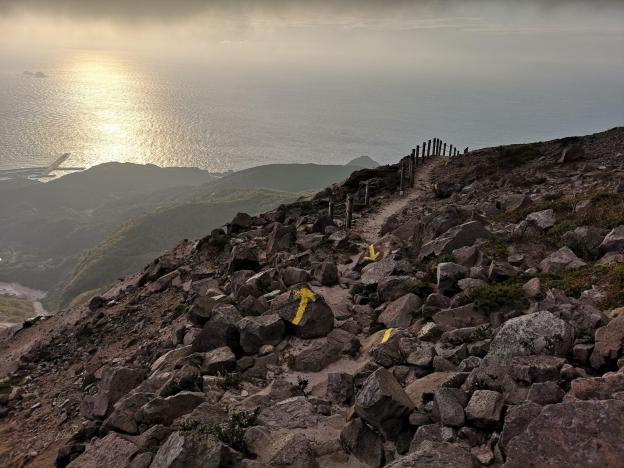 Going down and down

We were the only hikers on the mountain

We set off hurriedly as the sun slowly approached the horizon to the West. A different switchback path took us down, and soon we were walking under forest cover at the base of the volcano. Darkness was falling quickly and trail was getting harder to follow. Finally, just when I was considering taking out my headlight, we reached a road at around 5h30. Thirty minutes later we reached our hotel, where we were rewarded with a couple of cold beers.

Two beers (and a turtle) for two tired hikers