As the 2019 rainy season drags on, the past two weekends have been washouts. Fortunately, this gave me time to revisit some of my hikes during the same period two years ago. All four hikes are quite long since I was taking advantage of the longer summer days, and none are featured in my guidebooks. Considering the continuing gloom of this year, I realise how lucky I was with the weather!

This hike starts from Matsuhime Pass (1250m). I first headed Northwest towards Mt Omatei 大マテイ山 (written like this) less than one hour away. It was featured in my best hikes of the Kanto area guidebook, so I wanted to check it out. It was an easy and peaceful walk through beautiful forest, with a good view of Mt Fuji on the way. 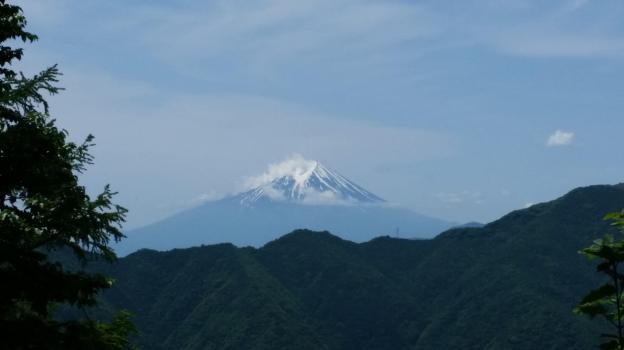 Still lots of snow on Fuji in June

I then retraced my steps to the pass, and continued Southeast towards Mt Narakura 奈良倉山 only thirty minutes away. There was another view of Mt Fuji, but by now it was hidden in the clouds. The trail, which had veered southwards, had become a pleasant forest road. On the other hand, dark black clouds had suddenly appeared overhead – fortunately they didn’t lead to any rain. 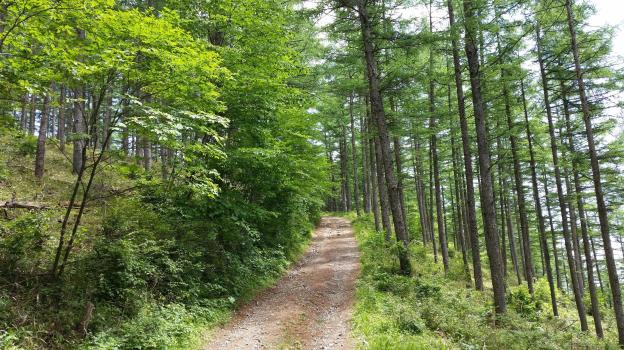 I saw some pheasants on this hike, a sign of a seldom hiked trail

After another hour of solitary hiking I reached a junction where I turned left (East) at Nishihara Pass – I had been here once before when coming from the opposite direction from Mt Gongen. One hour later I was at the top of Mt Tsubo 坪山. The last part of the hike was down to Saihara village 西原村 where I had hiked recently.

End of the hike – Saihara Village

There are 3 trails heading down from the summit. Unfortunately I could only find two of them, and I ended up going down the wrong one. Originally I wanted to go straight but I went down a much steeper path, heading North. The silver lining was that I could walk along the river at the bottom of the beautiful river valley to the bus stop for a while longer! 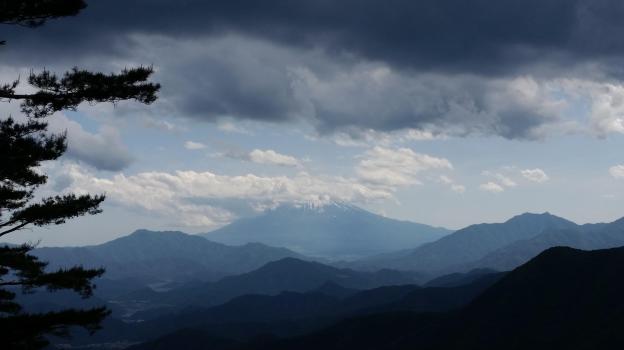 This is a really long day hike from Tokyo, and I only recommend it if you are fit and the days are long – it took me four hours to reach the top and four hours to walk down. I saw only three people during the entire hike. The starting point, Sanbonmatsu (1500), just North of Chuzenji Lake, could be included as a good place for hiking when it’s hot and humid in Tokyo, if it didn’t take such a long time to reach from Tokyo (approximately 4 hours).

The first part of the hike was rather boring, following a road through the forest. At one point I saw a solitary monkey. It took me around two hours to reach the junction with Mt Nantai. By this time, the blue skies had turned into mist. Another hour of mostly flat walking took me to a rocky river valley, where the real climbing started.

Although the climb was tough, steep and shrouded in thick mist, the surrounding forest was wild and beautiful – is it possible that I had left Tokyo only this morning? I put on my bear bell, which I rarely do, since I saw no other people and the vegetation was still thick above 2000m. 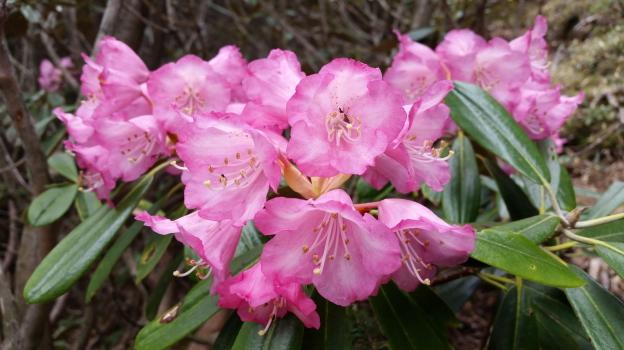 I reached a lonely emergency hut after an hour, and I was at the summit of Mt Nyoho 女峰山, a two-hundred famous mountain, just after 2pm. The very last part was above the tree line, and through some very impressive steep and rugged volcanic landscape. Unfortunately the mist was still in. I waited as long as I could, but despite giving some signs of lifting, it never did in the end. 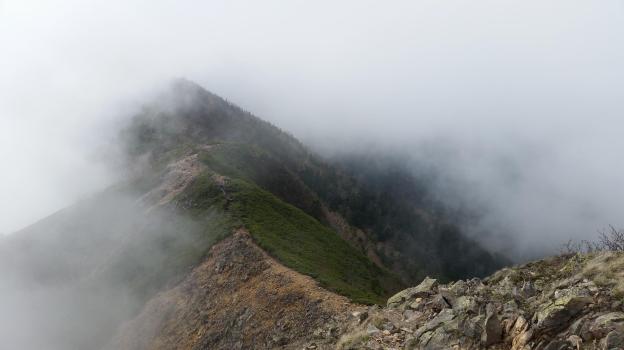 I finally headed down, back to the hut, where I continued along a different path through thickening mist. My plan was to walk all the way down to Nikko city, 1800m below, but I hadn’t realised what I little frequented path I was taking. It was an eerie descent: mostly silent, with fantastically shaped trees popping into view at various points. 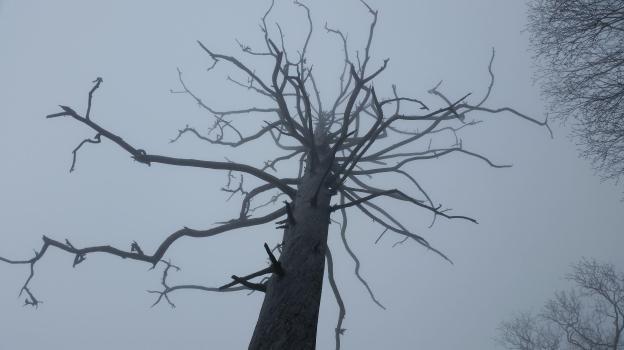 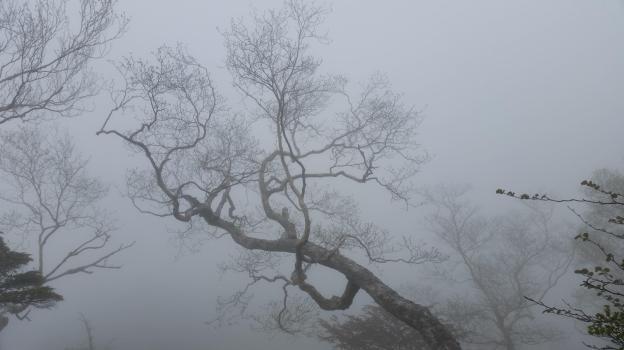 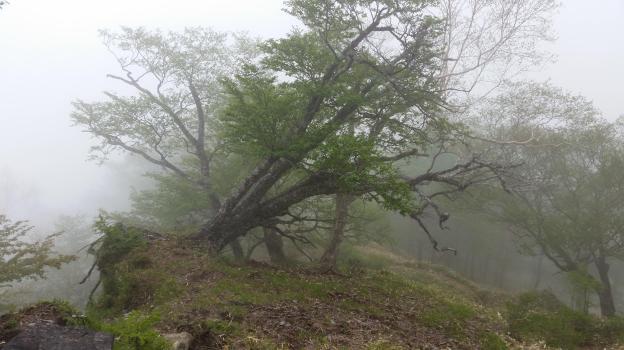 Finally, I was below the cloud cover, and a wide view of Nikko city and the surrounding mountains emerged. The path flattened somewhat. I was no longer alone – deer scattered before me. Another hour and a half of walking brought me to the Nikko Toshogu shrine complex, from where it was another twenty minutes to the train station.

A mix of misty and panoramic views

This is another long hike of my own creation. Basically I wanted to link Michizaka Zuido Iriguchi with Akiyama hot spring. I had been to both places before, but I wanted to hike the ridge connecting them, since it overlooks the valley of Doshi village. I had hiked the opposite ridge when I crossed the entire Nishi Tanzawa mountains in one day. The village of Doshi, which I have never been to, is a place of great fascination to me.

It’s about the same distance from Tokyo as Chichibu, yet it’s impossible to visit as a day trip using public transport due to poor bus connections. So every chance I get to peek at it from the surrounding mountains, makes me feel like I am getting a glimpse of a hidden valley. I must always remind myself not to end my hike along the valley containing doshi valley because it would require hitchhiking to get back to nearby Tokyo.

The day I chose for the hike was a very hot and humid day, and although the climb to the top of Mt Imakura 今倉山, which I had climbed before, was short, it was also tough. Luckily, from there it was mostly going down, albeit with one steep climb on the way. The ridge was narrow but shady on this beautiful sunny day. Half an hour after leaving the summit I got my first views of “doshi valley” and Mt Fuji peaking through the clouds as an additional bonus.

The path near the top of Mt Nabatake

Thirty more minutes of easy hiking brought me to the top of Mt Nabatake 菜畑山. A steep descending slope, followed by an equally steep one going up, brought me to the drawn-out summit of Mt Akakura 赤鞍ヶ岳. From there it was a gentle downward sloping ridge. The vegetation had changed from wild to tame – you could sense the proximity of human habitation.

As I dropped below one thousand meters, I started feeling the heat and humidity more. At Gando Pass 厳道峠 I turned right. I could have continued straight, but I wanted to explore the connecting to path to Mt Afuri – I had seen the other end I few years ago after climbing that mountain. The first part was disappointing – a fairly steep and difficult to navigate descent, followed by a shorter but equally steep ascent. 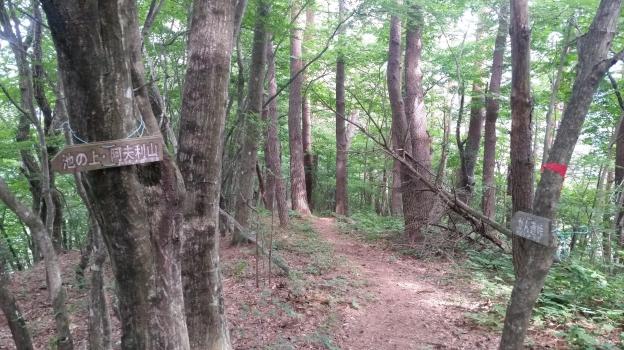 However, after that I was hiking through beautiful forest – squirrels and pheasants  darted left and right into the bushes. The second half of the trail certainly lived up to its promise. Too soon I reached the road at the end of Mt Afuri, from where it was another hour of hiking till the (very welcome) hot spring bath. I was fortunate to spot a Japanese badger crossing the road at one point.

This is another ridgewalk connecting two prefectures of my own creation. Since the return is via Shinkansen, it’s a bit pricey, unless you have a Tokyo Wide Pass. The starting point is from Odarumi Pass (2365m), the 2nd highest place you can reach by bus from Tokyo as a daytrip. I had been there once before when climbing Mt Kinpu (the day Mt Ontake erupted). This time, I headed due West under a grey overcast sky. Very soon, I reached the trail for Mt Kita-Okusenjo 北奥仙丈山, branching southwards, the highest peak of the entire Okuchichibu mountain range. Unfortunately because of the clouds, the view wasn’t so great.

I didn’t linger since insects were swarming, so I retraced my steps and continued to Mt Kokushi 国師ヶ岳, a 300-hundred famous mountain, which I reached just before 11am. Afterwards, the path descended somewhat, then flattened while turning Northeast. It was a long forested ridge, with few views, and I reached the base of Mt Kobushi, two and a half hours later. I saw very few people, and it was a very enjoyable ramble. 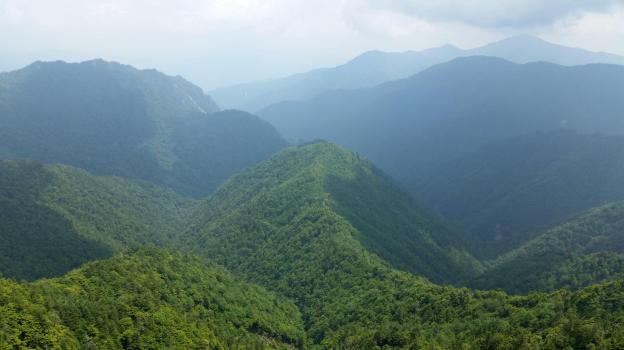 Since I had been up Mt Kobushi before, and thunderstorms were threatening, I decided to skip going to the summit, and descend immediately via the upper reaches of the Chikuma river. This river is the longest and widest river in Japan (known as the Shinano river in its lower reaches). Soon after I started descending, I reached the source of the Chikuma: just a signpost and a trickle of water through the forest, around 2000 meters high. Very soon, the trickle of water became a mountain stream.

It was a very enjoyable two-hour walk along a beautiful river valley in what was now Nagano prefecture. Eventually I reached the car park from where it was another hour of walking to the bus stop. However, a group of young people kindly picked me up on the way and dropped me off at Shinano-Kawakami station on the Komi line.

Check out the humble beginnings of the longest river in Japan