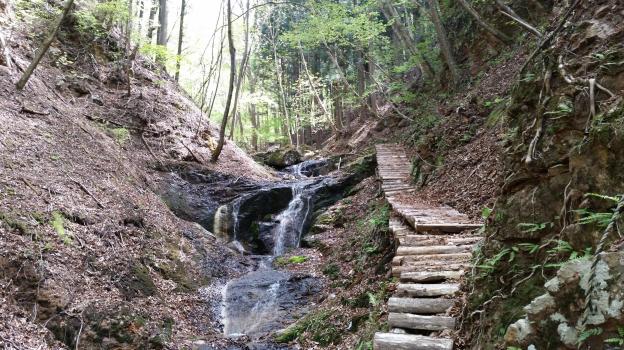 I may have said this before but this mountain probably has the longest access from Tokyo, or at least requires the highest number of different modes of transport. First I used the shinkansen to get to Takasaki. Then I changed to a local train for Shimonita. After that, I hopped onto a minibus, that took me through the mountains by way of a tunnel to the Village of Ueno. Finally I took a taxi, driven by the wife of my minivan driver, to the start of my hike deep deep inside Gunma Prefecture. Amazingly, everything went like clockwork and I was ready to start hiking before 10:30. 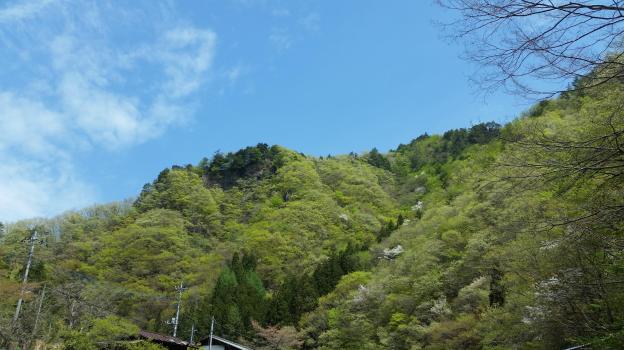 Even though it was already the start of May, the mountainside was dotted with yamazakura

The first part was up along a stream following a steep valley. No sooner had I set out that a yellow-furred Japanese weasel or “itachi” crossed my path, the first time I had ever seen one. After crossing the stream several times on wooden bridges, the path suddenly gotten steeper. I was surrounded by the light green leaves of spring and it was very beautiful. Finally I reached the top of the ridge, and the going got easier.

Easy hiking once you reach the ridgeline

Soon I got views of the neighbouring and yet-to-be-climbed Mount Chozuke, as well as the tops of Mt Yatsugatake and Mt Ryokami. Before reaching the top of Mt Suwa 諏訪山, a three-hundred famous mountain in Japan, I had to summit another peak on the way. It turned out to be quite an exciting section – a rocky prominence with steep climbs and drops. The surroundings felt very wild, and it was hard to believe that only a few hours ago I was in Tokyo.

After taking in the great views from the top, I set off for the final part of the hike. I reached the top at 13h30, surrounded by deep forest – I was the only person and it was very quiet and peaceful. I thought it was shame that the path didn’t continue further. The return was along the same way so I hurried back down. There was an option to take a different path further down but it was just too long for a one day trip. After reaching the start of the trail two hours later, I headed to a nearby onsen.

Although the path seemed sketchy at times, it was perfectly safe

After a very quick bath, I started walking back along the road to the bus stop at Ueno Village, one hour away. However before I was halfway there, I was picked up my bus driver from the morning who happened to be passing by in his own car! He dropped me off at the bus stop so I had time to spare before catching the bus back to Shimonita. 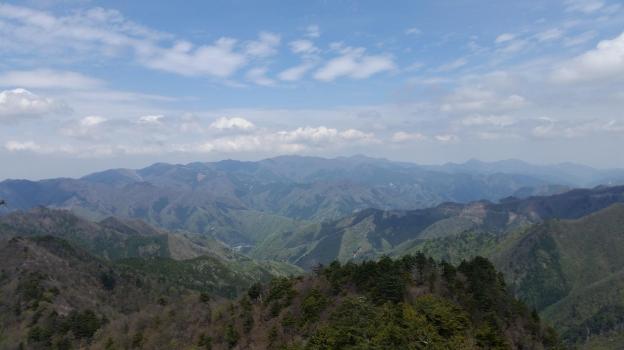 View to the North and Gunma prefecture 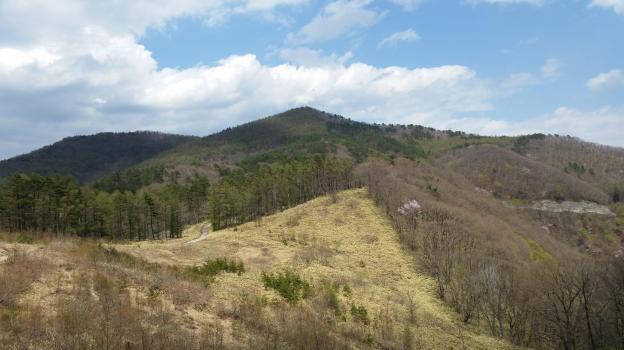 Mt Oujou, the highest point of my hike

This is an off-the-map hike that I found through Google Maps. I was looking for new ways to use the Tokyo Wide Pass and by checking the mountains near the Agatsuma line and then looking them up on Yamareco, I found that Mt Oujou 王城山 and Mt Takama 高間山, both Gunma 100 famous mountains, could be done together as a day-trip from Tokyo.

A good view of Mt Oujou on the way back

After getting off at the the tiny but new Kawarayu Onsen station, I made my way across a long bridge above a meandering river far below. According to the signs on the bridge, there is a plan to dam the river and flood the valley to form a lake. Although the projected representation looked nice, I still felt that it was shame to destroy such a picturesque valley. On the other side, I turned left and walked along the road for a bit before taking a road that went straight up the side on the mountain to my right, to the start of the hiking trail.

According to the dam project, the floor of the valley (where the house is) would be flooded

As with Mt Suwa the day before, the mountainsides were dotted with yamazakura, and all around I could enjoy the new green leaves of spring. I reached the top of the first summit of my hike before 12h30, less than two hours after setting out. I had great views of Mt Asama to the south, and Mt Azuma and Mt Shirane-Kusatsu to the West, all still covered in snow. To the West I could also spot the outline of Mt Haruna.

For a Gunma hike, the path was fairly easy to hike

After a short rest I continued along the hiking path. It followed a ridge with steep drops on both sides. I had occasional glimpses of Kusatsu on my left. I saw no else on my hike, and that in itself made it really lovely. Eventually I crossed a road and started up a steep path – the final ascent for the second peak of my hike. The view from the top was less good than the first one but still nice. The clouds had rolled in and it was starting to get cold so I soon headed back the same way I had come.

Glimpses of Mt Kusatsu-Shirane through the branches

Most of the return was along the same way, although it was possible to take a small detour to the right at one point. Coming back down, I was able to admire the steep dramatic mountain peaks on the opposite side of the valley. Unfortunately, as far as I know, there are no hiking paths there. After reaching the station, I continued a little further to Kawarayu Hot Spring, about 10 minutes away through a tunnel, a great place to soak before catching a train back to Takasaki and Tokyo.

Only locals know a way up this mountain 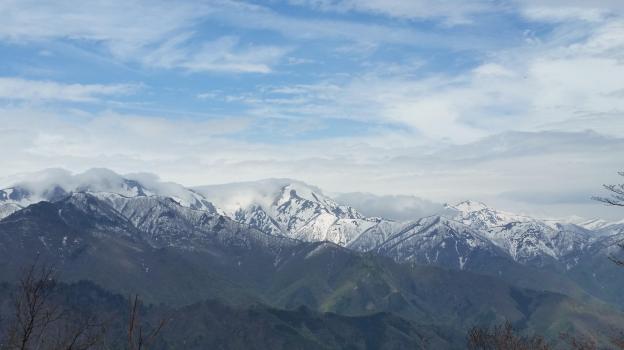 Clouds rolling over the highest points of Tanigawa range

Since the weather seemed to be holding, I dared do a third consecutive hike. Also since it was the day before the last day of Golden Week, I felt the trains coming back wouldn’t be too crowded. Mt Azumaya 吾妻山 is a Kanto hundred famous mountain, just West of Minakami Town in Northern Gunma. As far as I know, there is no public transport to the trailhead, so I had to settle on a short taxi ride from Jomo Kogen Station on the Joetsu Shinkansen.

The taxi dropped me off at the end of the road in an opening in the midst of a dark pine forest. There were no other hikers and the sky was overcast. After a quick breakfast, I set off along the forest road. I soon reached a wide lake, with the main ridge on the opposite side. I opted to walk it clockwise and it turned out to be a lucky decision: I found out later that the other half was obstructed by snow! Despite not being especially high, its closeness to Japan’s snow country meant that the area gets quite a lot of snow in the winter. 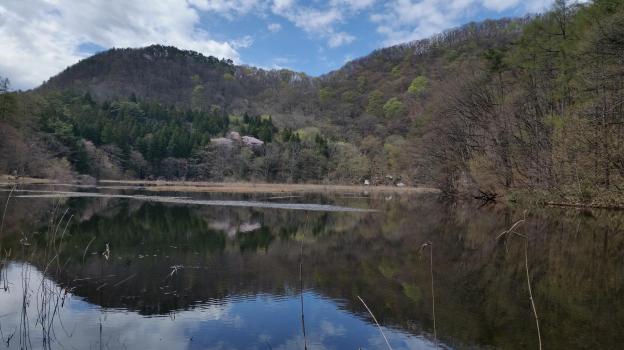 Lake at Omine Marshland – the white slightly to the left of the center is Sakura, and the white on the right near the water is snow

After reaching the opposite end of the lake, I started climbing and spotted some Azalea next to the path, a sure sign that spring was on the way. Other that, I didn’t see much spring green in stark contrast to my two previous hikes. However, like the two previous hikes I saw absolutely no one. I did see some “Kamoshika” or Japanese Serows jumping away from me, and I startled a few Japanese pheasants. At one point it started to rain lightly and I started to doubt whether I should have gone on a hike at all.

Long staircase going down and then up the other side

Fortunately the rain soon stopped. After going down a very long metallic staircase and the going up an equally long one on the opposite side, I was confronted with more snow, this time lying across my path. As I walked on the snow, I was amazed that I was doing a snow hike in May at around 1000 meters. Luckily the path was easy to follow. I reached the highest point and a small shrine before noon. There were good views to the East of Minakami Town and yet-to-be-climbed Mt Mitsumine. To the North was the Tanigawa ridgeline still partially covered in snow and clouds.

The weather was improving gradually, and after lunch, I got some better views of Mt Tanigawa and the neighbouring peaks. Unfortunately I couldn’t linger since there was still a long way to go. I started down, continuing North along the ridge. I had some nice views of Mt Hotaka, and finally saw lots of green spring leaves. After descending a long wooden staircase, I reached the bottom of the valley, and turned onto a nice forest road along a river.

By now, the weather was sunny and I was in high spirits. Here I relaxed and somehow managed to miss a turn to the right. Soon the forest road ended, and I had to retrace my steps in order to find the turn. The turn took me across a river and onto a road where I turned left. My plan was to walk all the way to the hidden onsen of Sarugakyo, one hour away. Fortunately the road was quite wide and had sidewalks on the sides. I could still enjoy various kinds of Sakura in full bloom on the way.

Eventually I took a small hiking trail to the left which ended at the the very nice Yushima Campground alongside a river. I did a short detour to check out a nearby waterfall, then walked up a short road to Sarugakyo Onsen (literally hot spring of the Money Capital). The view of Lake Akaya with a string of Koinobori flags strung across it was quite spectacular. After a nice bath with a view on the lake, I caught a bus back to the Jomo Kogen station, just one hour from the capital of Japan. 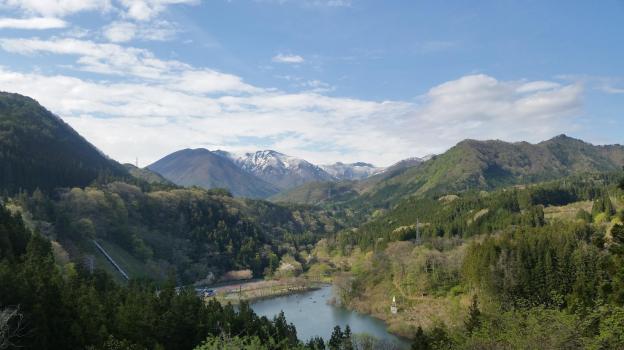 Looking back towards the Tanigawa range