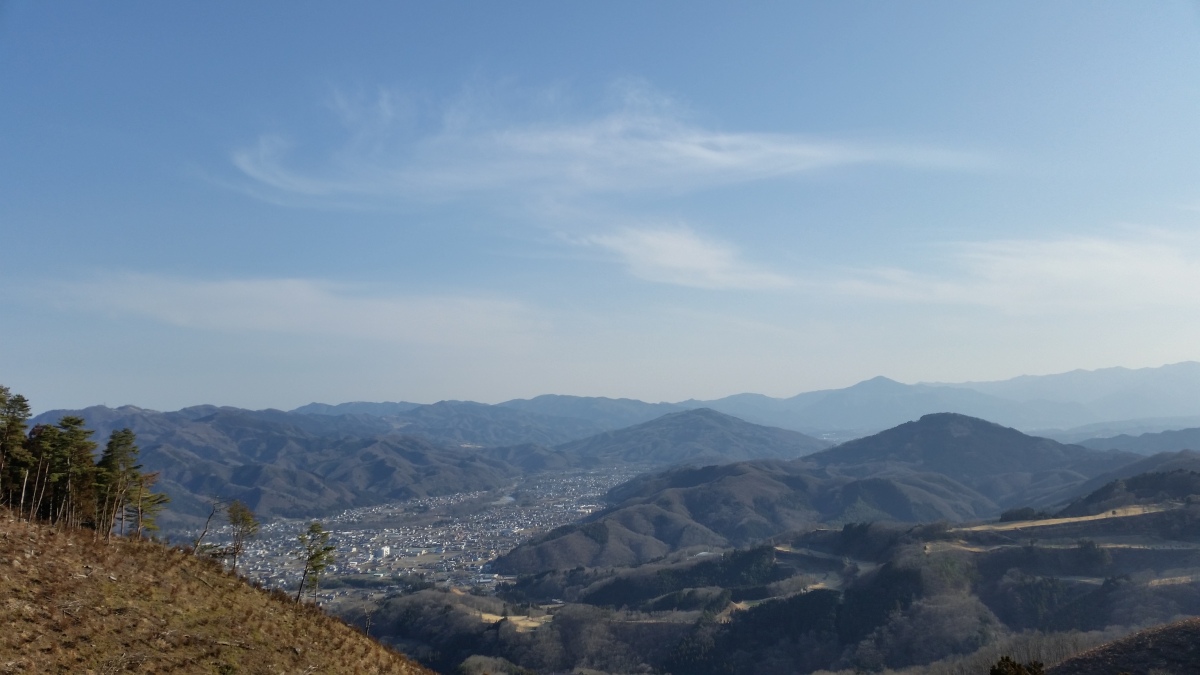 There were two good reasons for climbing this mountain: it was a kanto hundred famous mountain, and it was less than two hours from Tokyo. On the flip side, it was only a two hour hike. By looking at my Chichibu hiking map, I saw that I could extend it by following the ridge to the Southwest, above the Arakawa river valley.  I was curious whether it would make a satisfactory hike with good views. 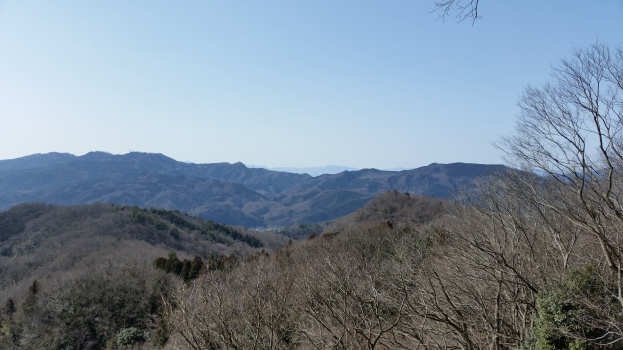 I arrived at Yorii station at 9am, and from there walked about 30 minutes through the town to the start of the trail. The trail climbed gently through the forest, and was easy to walk, except just for the steep staircase below the summit. I reached the top of Mt Kanetsukido 鐘撞堂山 (Kanetsukido-zan) around 11am. The name means “bell tower”, and it was easy to understand why since there was a great view of the Kanto plan; apparently it’s a good spot for seeing the sunrise. I could also make out Mt Haruna, the top snow-covered crater of Mt Asama, as well as the other mountains from today’s hike.

Staircase before Mt Kanetsukido (left) and the one after (right)

To reach the next mountain, I had to hike back down the other side, cross a road, and walk up again. Another staircase took me to the top of the ridge; there was an arbour, but not much of a view. After that, the trail followed the ridge Westwards. Flat bits alternated with some ups and down, but overall it was an easy to follow trail. I reached the summit of Mt Jinmi 陣見山 (Jinmiyama) 531m, and a small TV antenna, at noon.

A lot of the trail was like this: flat, easy walking

I quickly moved on. Half an hour later, I had some good views Southwards of the Arakawa river valley through the trees. The trail merged with a forest road for a while, and at 1h40, I reached the top of Mt Amagoi 雨乞山 (Amagoi-yama) 510m, no doubt the highlight of the hike. I didn’t expect such breathtaking views of the Arakawa river valley and the surrounding mountains. It was also a a jump-off spot for paragliding, although nothing was happening during my visit. By the way, the mountain name can translate as “praying for rain”; fortunately, there were no rain clouds in sight!

The best view of the hike from Mt Amagoi: the Arakawa river valley

After admiring the views, I set off again. The path continued to be really easy to hike, with few steep or narrow sections. At 3pm, I reached the summit of Mt  Fudo 不動山 (Fudou-yama) 549m, meaning steadfast. There was another excellent viewpoint here, especially since around now the sun was behind my back. I could see Nagatoro town, Mt Buko, Mt Haruna and Mt Asama.

View of the Chichibu mountains from Mt Fudo

It was 3h30 and time to start heading down. The last part of the hike took me past an interesting religious site, with many small wooden swords all over the place, something I had never seen before. On the most recent map, this path has become dotted, so I am not sure whether it can still be used. The last part was along a road, and I reached Nogami station around 5h30pm. I was quite pleased that I managed to turn a two-hour hike into eight-hour one, and I was satisfied with all the great views along the way.

Wooden Swords at the mysterious religious site on the way down