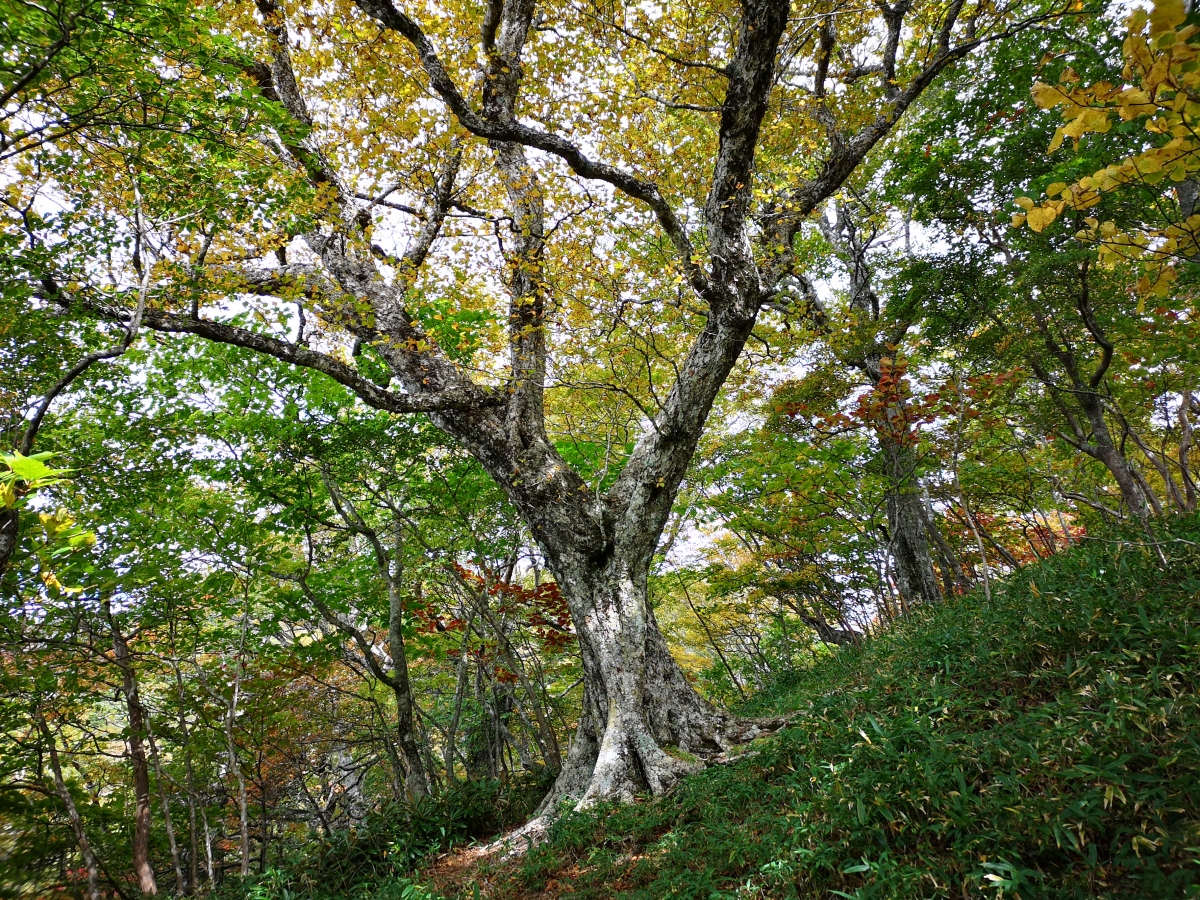 This was a fairly remote mountain situated 150 kilometers directly north of Tokyo. Fortunately, the bus times lined up with the train times, so this hike could be done as a long daytrip. This time, I wasn’t concerned about the weather: the forecast announced sun, then clouds, followed by rain after nightfall. My main concern was whether I could complete an 8h30 hike, according to my guidebook, in six hours. If it took me any longer, I would be forced to take a longer and more inconvenient route back to Tokyo. Finally, I was hoping that I would still be able to see some beautiful autumn colours.

View below the summit before the clouds rolled in

After getting off at Kami-Miyorishiobara-Onsenguchi Station (long name but characteristic of the area), I boarded the diminutive “Yu~ bus” for the short ride to the start of the trail. I was the sole passenger; the conductor was friendly and chatted with me about my plans for the day. The start of the hike was along a small road; I saw famers harvesting rice, and also rescued a praying mantis from a precarious position (see video). Around 10am, I was finally on the hiking path. After a short climb, I reached a level forest road which I followed for about 15 minutes. The sun was shining and I had some good views on the right side.

View of Mt Takahara from the entrance of the hiking trail

Just before 11am, I reached the end of the forest road and was back on the hiking trail. It went up and down through mixed forest. At times, the trail was faint and I had to be careful not to lose it. It was very peaceful and there were no other hikers. Half an hour later, I reached the start of a long climb. Another half an hour later and 400 meters higher, I was hiking through a very different kind of forest. On my map it was called “Asunaro no mori” (アスナロの森 – Thujopsis forest, a kind of conifer). The path, following a ridge as it curved northwest to northeast, was mostly flat, allowing me to enjoy the surrounding vegetation. At one point, I had a glimpse of the summit through a break in the trees.

Shinto gate on the trail

Around noon, I passed under a solitary Shinto gate, placed on the trail for no apparent reason. From here, the trail started to edge upwards again, and the conifers made way to beech trees. This section was incredibly beautiful, the trees trunks twisting themselves into interesting shapes; although I was near the top of the mountain, I felt like I was walking through a wood in the countryside. I was, after all, hiking at the very edge of the Nikko National Park. Around 12:30, the path got steeper, and I thought I was reaching the top, but fifteen minutes later, I emerged onto a shoulder with a view of the summit, still some way ahead. This pattern repeated itself a few more times, during which I passed another hiker on his way down. The sky had become overcast. On the bright side, the autumn colours were still on full display.

Hiking among the beech trees

At 1pm, I finally reached the top of Mt Hiruga (日留賀岳 ひるがたけ), a Kanto hundred famous mountain, just as the mist was rolling in. I had a brief glimpse of the view before the world turned white. I had a quick lunch next to the summit shrine, and then started to descend the same way. It had taken me three hours to reach the top, so I had ample time to get down. However, if I got down early enough, I would be able to take a hot bath before the long trip back. The path was easy to walk so I was able to run most of the way. The forest was eerily quiet, save for the occasional barking of deer, and gloomy; it felt like it could start raining at any moment. I reached the trail entrance a couple of hours later, and thirty minutes later I was at Hana no Yu. After a quick, but satisfying bath, I hopped onto the empty bus for the train station. As I entered the station building, it started to rain, so I counted myself doubly luckily that I finished the hike on time and dry!