It was my first time to do a full hike along the Kanto Fureai No Michi, also known as the Metropolitan Area Trail, following section four of the Gunma portion. I chose it because it seemed to mostly follow a hiking path through the mountains. Also, it was in an area I had never been to before, but that I had seen many times while taking the train to Takasaki.

Castle-shaped Observatory near the summit

In Takasaki station, I transferred to the Hachiko line, a small railway running parallel to the Chichibu mountains, all the way to Hachioji. A sign told me that it was leaving from track 3, located between tracks 2 and 4. That seemed obvious, but it also indicated that it shared the same platform, seemingly impossible. However before I could inquire, I spotted track 3 starting at the end of the platform, and it was with relief that I boarded the train. It’s never easy to handle these complicated train situations first thing in the morning!

The plum blossoms were out

I got off at Gunma-Fujioka station just a few stops away, and waited half an hour for the mini-bus that would take me to the Kami-Kashima bus stop. I was of course the only passenger. The bus headed West following the Ayu river. I got off shortly after 9am, and found myself standing next to the road in a narrow valley under blue skies. It was hard to believe that I had l left the heart of Tokyo only a couple of hours earlier. I quickly located the start of the trail, and made my way up the side of the valley. I passed plum blossom trees, solar panels, and slightly startled locals. Turning around, I saw the rounded peak of Mt Mikabo, which I climbed in 2016. Soon, I was walking along a dirt road through the forest, and I reached Konashi Pass 小梨峠 (584m) just before 10h30.

At the very right, Mt Shirasuna, which I climbed last year in October

From there it was a long walk downhill into the valley on the other side. At the bottom of the wide valley was the Joshin Dentetsu line, which connects Takasaki with Shimonita, and Tomioka city. This part was very peaceful, and had some good views of Mt Asama, Mt Haruna and Mt Akagi. In the background were the snowy peaks of the Joshin-Estu. There was some trail damage here, probably due to last year’s typhoons, minor at first, but more significant lower down. At one point, I had to clamber over some boulders and fallen trees. I hope that it will eventually get cleared up. As I walked down the valley, the forest road turned from dirt to paved, and ran parallel to a stream, and at 11h30 I emerged onto an asphalt road. 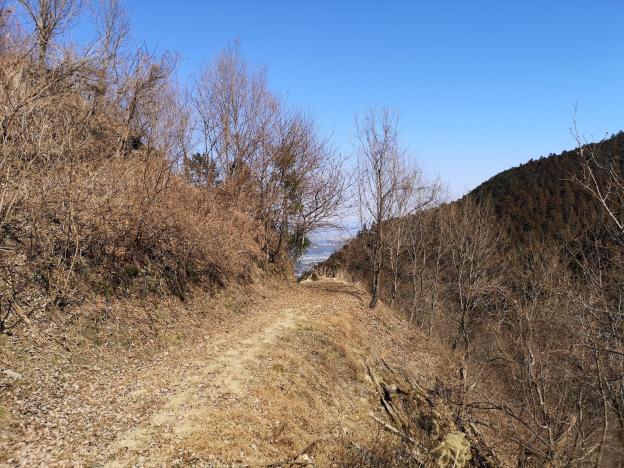 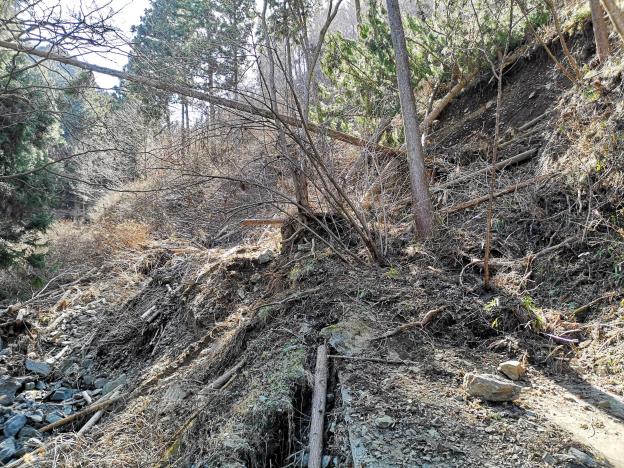 No so good trail lower down

I followed the road for a while, before turning left onto a tiny hiking path, up a small forested hill. All too soon I reached another road leading down the other side, through what seemed like an abandoned hamlet. Just after the road started climbing again, I heard a crashing noise coming from the forest to my left. While I was trying to process what it could be, a stag with fully-grown antlers crossed the road a few meters ahead of me. For a few seconds, I remained rooted in place; I had only seen a stag close up once before, while hiking in the Koshu Alps a few years ago. I continued up the road, slowly gaining altitude, and spotted a small hiking path on the left. I decided to check it out quickly. It led me to a bench and a fantastic lookout point. The trail continued down to the base of the mountain. I decided to stop and have some lunch. Afterwards, I retraced my steps, and found that the hiking trail continued straight up the mountain. I decided to leave the road for a while, since I would meet up with it again near the top. 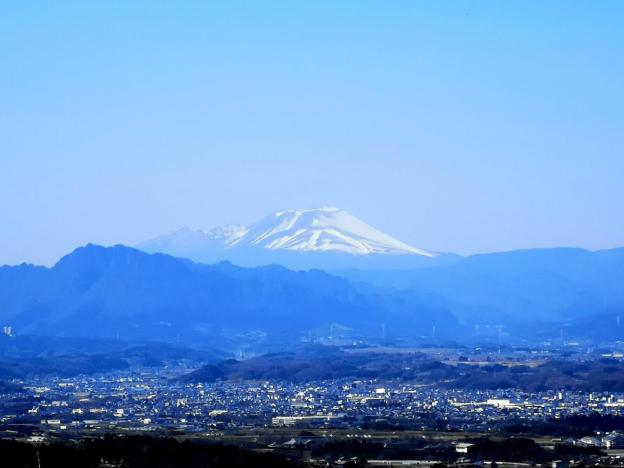 Direct hiking path to the summit

It was a pleasant hike along a sunny ridge. Through the bare trees, I could see the pass I had walked down earlier. The silence was broken by three successive gunshots, and I hoped they weren’t aimed at the stag I had seen earlier. At 13h30, I reached the top of Mt Ushibuse 牛伏山, a Gunma hundred famous mountain. Although the name means “cow sitting on the ground”, I couldn’t see any bovians nearby. There was a small shrine with a bell, a rest house and an NHK antenna. I gave the bell a ring, and then proceeded to the observatory at the top of a Japanese castle replica a few minutes away. I had great views of the Northern part of the Kanto plain and surrounding mountains. Behind, was the were the Oku-Chichibu mountains. Inside the castle were interesting pictures of birds of prey taken in the area.

In the background, the Tanigawa mountain range

It was starting to get late, so I started to head down the mountain. The first part was along hiking trails and a second part along a road. At 3pm, I reached Yubata Onsen. I had hoped to take a hot spring bath there, but unfortunately they had a reservation-only system, and the bath was already reserved till 4pm. The owner let me wait on the balcony in case the person left early, but it was not to be. Originally I had planned to take a bus back to the station but since I had some extra time, I decided to walk all the way back following the Fureai no Michi. There were some good views of Mt Haruna and the surrounding countryside. I reached Maniwa station around sunset just after 5pm.

NEXT UP: Sakurayama in Gunma