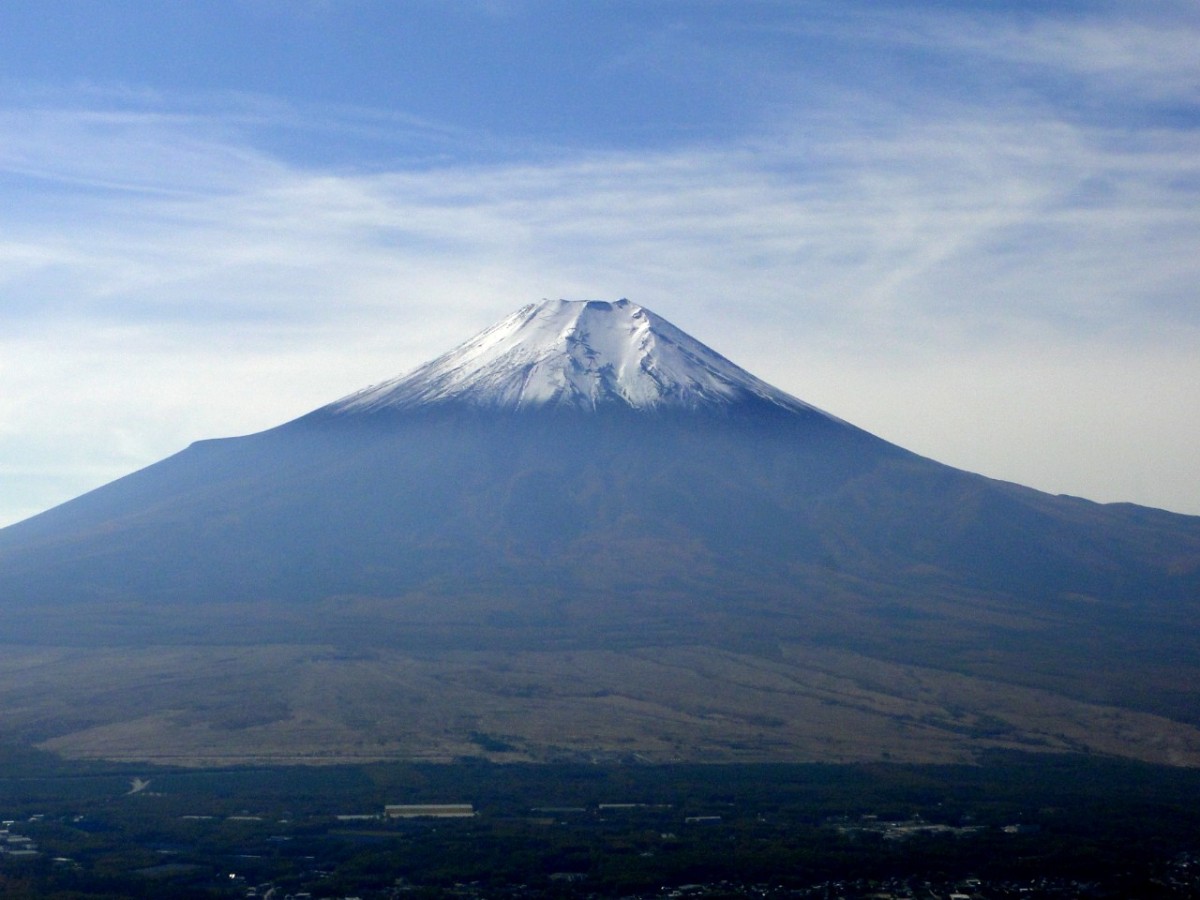 The main reason to climb Mt Shakushi, a Yamanashi 100 famous mountain, is to enjoy the fantastic view of Mt Fuji from the summit; there are no mountains in-between, just fields and forest surrounding Oshino village below. The hike is mostly along a ridgeline, with several smaller peaks along the way. Although I was hiking in the middle of November, there were few autumn colours.

HOW TO GET THERE: Take the limited express for Kawaguchiko station, and get off one stop before the end at Mt Fuji / Fujisan station (used to be Fujiyoshida station till 2010). This convenient but pricey train will get you to Fujiyama in time for the bus for Oshino village. It’s also possible to take a combination of local trains, but the connection won’t be as good. I was the only person on the bus – I guess everyone else had gone to see the autumn colours around Kawaguchiko lake.

Ask for a hiking plan for Mt Shakushi

THE ROUTE: From the bus stop, I headed along a road with Mt Fuji to my back. After crossing a couple of small streams I started seeing signs for the entrance to the hiking  trail. Very soon I walking along a dirt road surrounded by beautiful forest; it felt very different from hiking trails closer to Tokyo, especially since there was no-one else around. Eventually I overtook a family of five who had come by car.

The sun was perfectly aligned above Mt Fuji

After climbing steadily for a while, I reached a pass where I turned left up the main ridge. I soon reached a rocky roped section, with a nice view of Mt Fuji to the side. After the obligatory snapshots, I continued towards the summit. After a while, I arrived at a junction, from where it was a short round-trip to another summit called Mt Shishidome 1632m 鹿留山 (shishidome-yama). Since there was no view, I decided to skip it and continue on my way. The path was now slightly downhill.

A good day for paragliding

Suddenly I came upon the perfect lunch spot – a lonely rock with a stunning view of Mt Fuji. Even though I was a short way from the summit, I decided to stop for lunch; the final part was mostly flat, and peaks can be surprisingly crowded even when there seems to be no one else on the mountain. Occasionally other hikers would stopped behind me to admire the view, but overall it was a very enjoyable lunch. Not only could I see Mt Fuji in front of me, but also the South Alps  (some of the highest peaks were already covered in snow) and lake Yamanaka. Eventually I managed to pull myself away from the view and reach the summit.

Mt Mitsutoge to the West

The top of Mt Shyakushi (杓子山 shakushi-yama) has a couple of benches, and interestingly enough, a bell to scare away bears. I was so busy taking photos of Mt Fuji, I completely forgot to ring it! I was glad I had already taken my lunch break – the sun was moving behind Mt Fuji, and the side facing me was slowly becoming a dark outline. It looked like the sun would set exactly behind the cone, a phenomenon called Diamond Fuji. Unfortunately, there was no way I could stay till sunset, even though it was nice and warm in the autumn sun.

View of Mt Fuji while descending

There wasn’t really any rush to go down, since I could walk to the onsen at the base of the mountain without having to catch a bus. After I started to head down, I passed a couple on the way to the top, showing that this mountain is small enough for a late afternoon hike. The descent was uneventful, except that at one point it got really steep and I slipped and fell. Luckily the trail was just dirt, no rocks, so no harm done. There were many open spaces where I could observe the dramatic outline of Mt Fuji with the sun behind it. There were also some fine views of Mt Mitsutoge to the right. I also passed a launching pad for paragliding that included a mini funicular to haul the material up. After a final switchback trail, I reached a paved road at the bottom of the mountain, and made my way to Fudoyu onsen. After a nice hot spring bath, I caught the empty bus back to Fujisan station.

CONCLUSION: A short hike that I recommend doing in autumn or winter when the weather is sunny in order to enjoy the views of Mt Fuji. An onsen within walking distance of the base of the mountain is a definite plus.

Ask for a hiking plan for Mt Shakushi